If you’re not familiar with Priority Bicycles, they are a bike company that specialized in low-maintenance bikes. All of their bikes feature internally geared hubs. This means no derailleur adjustments, smooth shifting, shifting when stopped, and gears protected inside a casing. All of their bikes also use Gates belt drive systems, which means greater durability and no chain to keep lubricated.

One of their most affordable bikes is the L Train which is the result of a partnership with Brilliant Bicycles, which also makes affordable, low-maintenance bikes.

The frame is reminiscent of the groovy bikes I grew up with in the 70s. The steel frame, yes steel, rigid fork, and chrome touches, bring back a lot of nostalgia. If there’s anything I remember about my bike as a kid is its chrome, and the L Train has just the right amount. I also remember those banana seats, but no banana seat on the L-Train. Well, you can’t have it all.

What it does have that is super groovy is its internal gears and Gates belt drive. Both are ideal for a commuter bike that is going to be used and abused in the city. Even if you don’t plan to use it as a commuter, it’s a good bike to travel with and toss in the back of a car or RV.

At 27 lbs, it’s lightweight, especially considering its steel frame. You don’t have to worry about a derailleur getting damaged or bent or a greasy chain. One thing I wish it had is a quick release front wheel. That would make it super easy to place in the back of my car.

Of course, a big plus to not having a quick release front wheel is that a bolted on wheel is a theft deterrent, which is important in the city.

Assembly was straightforward and easy. You can watch a thorough assembly video walking you through each step. All the tools needed for assembly are included with the bike. It even comes with a small bottle of touch-up paint. Nice touch, especially since I chose the Pantone color of the year for 2022 for my frame.

Shipping was fast! It shipped the same day I ordered it, and the bike arrived in perfect condition just a few days later. 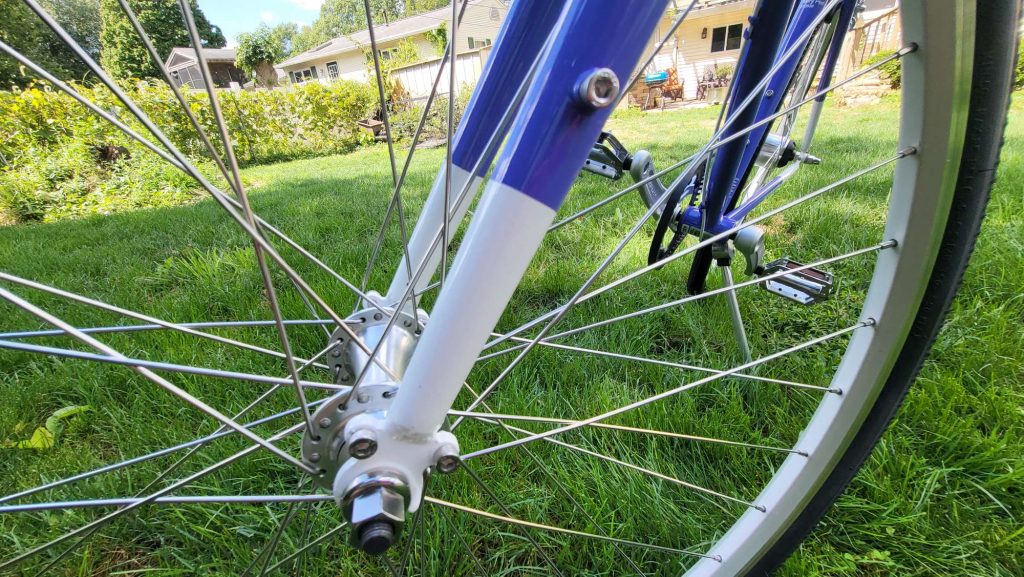 This is the first bike that I have ridden with a Gates Belt Drive. I have to say, on my first ride, I feared I would regret my purchase. I wondered why anybody would brag about these things. It got such great reviews. I wondered if the people who rode these bikes had thighs of steel and ate small pickup trucks for lunch. The belt was so stiff and made pedaling a chore.  Luckily, my fears were quickly relieved.

After about a half-mile of riding around the neighborhood, pedaling became much more what I expected. Apparently, belt drives require a little breaking in. Now, things are going smoothly, and I’m happy with my purchase. The belt is quiet, and carbon belts are known for lasting for thousands of miles.

There is a spot on the frame that comes apart to allow for belt replacement. All that is required is the proper sized Allen wrench.

I went with the 7-speed because I thought it would suit my needs, plus I liked the cost savings. If you’re in a hilly area, I’d recommend choosing the 8-speed. I have to say, though, that those 7 gears have been enough for the hills I’ve climbed. It’s definitely not a mountain bike in its hill climbing ability, but for city riding and occasional hills, it’s fine.

Shifting is different on a geared hub as opposed to a traditional derailleur. One big advantage is that you can shift while stopped. This is especially important in stop-and-go traffic. You don’t have to wait until you begin pedaling to switch to a more ideal gear.

On the other hand, it’r recommended that you don’t put a lot of pressure on the pedals when shifting. It’s best to let off some, but you don’t have to completely stop pedaling when changing gears.

I haven’t noticed any drag from the belt drive or the internal gears. It behaves much like any other bike I’ve ridden.

It has been a long time since I’ve ridden a bike with such skinny tires. I’m used to riding ebikes, many with 4-inch wide tires, so I felt a little unsure at first on the L Train. But, I soon appreciated the benefits of those narrow tires and their greater efficiency.

In fact, I chose the L-Train specifically for its lighter weight and tire size, feeling that it would be easier to ride in the city, as opposed to my 24-speed mountain bike. I prefer the increased width of mountain bike tires for stability, but I like the narrow width of a commuter tire for less resistance. It’s a trade-off all bicyclists are familiar with.

The L-Train can accommodate tires as wide as 45 mm, so if you feel the stock 32 mm tires aren’t for you, you have the option to make the switch later. I might do that. We’ll see.

However, if you’re coming from a road bike or gravel bike background, you’ll be accustomed to the riding style of the L Train. The steel frame, as expected, is stiff and sure. Speaking of the frame, the L Train is available in four frame sizes, so you should be able to find the right fit for you.

I love the vegan leather grips on the L Train. Not only do they look great, and match the bike’s vibe perfectly, but they are comfortable. There is a little bit of squish to them and shock absorption. The seat is pretty darn good too.

The only thing I’d upgrade are the pedals. It’s probably one area where some cost-savings was applied. They do the job, but they’re a bit clunky.

It’s been a long time since I’ve had a bike with V-brakes, but braking has been good. Also, I felt they were a good choice for a low maintenance bike, being that V-brakes are cheap and easy to maintain. If you’re going to be riding in wet conditions, I’d consider disc brakes, but for more recreational riding, I’ve found the V-brakes to be more than sufficient.

The cables run on the outside of the frame, as opposed to internally, but I like that too. It will make future upgrades or repairs easier.

Fenders, front and rear racks, and mirrors are available for the L Train, so you can carry a bag or gear with you. I appreciate that Priority doesn’t charge an arm and a leg for their accessories, too. I’m really liking what I’m seeing from this company.

If you’re looking for an affordable, low-maintenance bike for the city, then I can confidently recommend the L Train. I feel comfortable with the company, and really dig their other bike models, including their very highly-rated electric bike, the Priority Current.

If you’re wanting more comfort and more gears, the Priority Turi is a great option. They also have gravel bikes and other city bikes with very good safety features, like the Priority Continuum Onyx with built-in lights that power themselves.

–We use affiliate links to fund the site and future reviews. Thanks for your support! 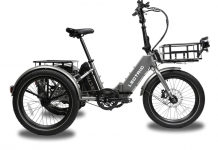