Oh boy, where do I start? Way back in January 2022, I decided to buy an electric moped from Zoom Scooters, even though I already knew of their less than stellar customer service. I wanted to be the guinea pig for others, because very few real customer reviews were to be found. Before buying, I found out a lot about the company through the Better Business Bureau, with a recurring theme of slow shipping and broken promises. So, as a reviewer, I thought I’d be of service to others, who are wondering if this is the right scooter for them.

UPDATE: Before we go, I want to update that I did finally receive the manufacturer of origin certificate with a VIN number. This only happened after filling a complaint with the Better Business Bureau. So, now I will try to register the scooter in the state of Illinois, and I will let you know how that goes! – June 20, 2022

The good news is that the scooter itself is actually quite good, although I haven’t really been able to ride it much. Since I still haven’t received the paperwork to register the scooter, I can’t ride it like I want to. It’s capable of speeds of between 30-35 mph, which makes it an equivalent of a 50cc moped. Most states only require a regular driver’s license for such mopeds. Most states will require plates and insurance.

The scooter does have a VIN number printed on it, which is reassuring. It’s super quiet, has quick acceleration from a dead stop, good hydraulic brakes both front and rear, and a comfortable seat with storage underneath. The suspension is a little stiff, but the seat makes up for it. It’s also nice that it has LED lighting both front and rear I’ll be sharing a video review of the scooter soon, so check back. So far, I don’t have any complaints about the scooter, but I do have complaints about the company.

First off, it’s stated on their website that shipping takes about 2-3 weeks. Some have received their scooter in this time period, but most wait longer.

There is no tracking information, so you have no idea when it’s actually shipped or where it is. Supposedly, it ships by rail to reduce cost, and then is delivered by a third party carrier. It took exactly two months to receive my scooter. I ordered on January 9th and received the scooter on March 9th.

It arrived with no damage, and was fully assembled. No complaints there.

It didn’t come with the charger, so I emailed the company on the day I received the scooter that I needed a charger shipped to me, and that I would also need the manufacture of origin paperwork to register it. They replied on the same day telling me that they would ship the items. That was March 9th.

Here it is April 24th and I still haven’t received the paperwork or the charger. I emailed them again this past week, and they said I would for sure receive these items within four days. It’s been four days, and still not here.

Even if the scooter turns out to be awesome, I can’t recommend that anyone buy anything from this company. They consistently lie. I wouldn’t have a problem with them if they stated up front that it would take two months to receive the scooter. I ordered in January, so I wouldn’t be able to ride it here in Illinois until two months later anyway.

There’s no legitimate excuse for registration paperwork to not accompany the scooter or be mailed to the customer within a few days of delivery.

So, if you are considering buying from this company, you have been warned. It’s a shame that they don’t run the business in a legitimate fashion, because the scooter is good for the price. There’s no reason for the company to be untruthful. Just be honest, honor your word, and treat people right. That really isn’t so hard to do. 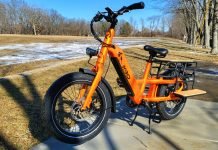 First Look at the KBO Ranger!