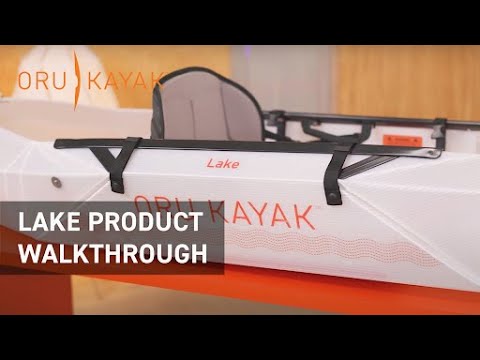 Oru Kayak launched their latest new folding kayak, called the Lake, on Kickstarter today. It is projected to begin shipping to backers in August 2022. This is the smallest, lightest, and most affordable kayak offered by Oru. If you’re an early bird backer, you can pick it up for $499 plus shipping. Full retail price is listed as $699, $300 cheaper than their second most affordable kayak, the Inlet.

The Lake and the Inlet differ in a few notable ways. The Lake is shorter by 8″, but wider by 1″ to make a super stable calm water kayak. Unlike the Inlet, the Lake also doesn’t have any included bulkheads or a footrest. You can add a footrest for an extra cost, though. I’ll have to knock Oru a bit here, because I think it should come with a footrest, especially at its full retail price.

Also, unlike the Inlet, the Lake doesn’t have trim on all of its edges, but has a solid seat platform for added rigidity and support. The seat is included and made of memory foam. I haven’t heard of many complaints of Oru’s seats, so I hope this remains the case for the Lake’s seat. It’s not adjustable for height, but looks like it will provide adequate support for most beginner kayakers.

Probably the best feature of the lake is how quickly it can be assembled, in about a minute with practice. Probably closer to 2-3 minutes for us mere mortals. It folds up into a super compact size of 42″ x 10″ x 18″, making it easy to fit into nearly any car. You could probably fit two or three in the back of many cars.

The Lake also only weighs 18 lbs. This means nearly anyone can lift it with ease into the back of a car, or carry it down to the water without struggling. It also has a 250 lbs payload capacity, which is pretty darn good for a kayak that folds.

As far as the performance of the Lake goes, it will likely be very stable to sit in, but not track as well as longer, more narrow kayaks. It should outperform your basic budget friendly inflatable kayaks though, due to its rigid plastic construction and angles.

This isn’t the kayak to take down the rapids, or take out on choppy waters, but it should be great fun and stable for beginner kayakers, and those just wanting to take it easy, on a beautiful summer day.

So, I decided to back the project on Kickstarter to save $200 off of its future full retail price. I think it’ll suit my needs fine. Lightweight? Check. Easy to assemble? Check. Compact for storing? Check. Stable? Check.

Just know that with Kickstarter campaigns, projected delivery dates often change, and design details may change as well. But, Oru Kayak is an established company, being in business for 10 years, and producing thousands of kayaks over those years.

Until I have the Lake, I’ll be testing out the Tucktec folding kayak this summer. It’s also a folding kayak, not quite as easy to assemble, and not as light as the Lake, but more affordable.

If you’d like to learn more about the Lake, check out the Kickstarter campaign. 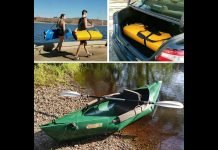 TuckTec Folding Kayaks, Made in the USA, Might Be What You’re Looking For