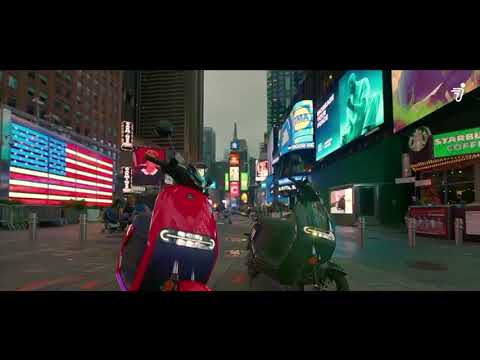 If you live in Asia, Europe, or India, you have a wide pick of electric mopeds and scooters to choose from. Here in the United States, the pickings are much slimmer. Micromobility hasn’t taken hold here yet, but with gas prices nearing $5/gallon, more people may be compelled to take a serious look. Segway-Ninebot is one company that hopes to attract American buyers with its E110a street-legal moped. Let’s take a look.

Segway already has an electric moped, in the form of the C80, but with a top speed of 20 mph, it isn’t too practical for riding in city traffic. The E110a has the specs of a typical 50cc moped, with a top speed of around 30 mph. The kicker is the range, though.

With only 35 miles of range, it’s going to be hard to win over those who can buy a cheaper 50 cc moped that gets 80+ miles/gallon.

So, why would anybody choose a range limited electric moped that goes for $3500? Well, there are some advantages with an electric-powered moped. One, they’re quiet. Two, they don’t pollute the environment when you ride them. Three, there is very little maintenance: No finicky carburetor, no oil changes, and very few moving parts to break. They’re also very peppy off the line. They typically get you up-to-speed quickly, while many 50cc moped are more tortoise-like, unless you go for a two-stroke engine, like that of the Genuine Roughhouse or Buddy.

The E110a also uses some pretty sophisticated technology, like smart alarms, and sensors to keep the moped operating properly and safely. That costs money.

The E110a is also upgradeable by adding a second battery for double the range. I’m assuming that second battery would add another $1000 to the price, though. $4500+ for 70 miles of range? For that price, you’re getting into Vespa territory. Their cheapest model, the Primavera 50 is around $4000 and gets 80 mpg.

If you’re in the market for an electric moped/scooter, you might want to research Niu, which are sold in some parts of the United States. Also, Yamaha is bringing some compelling electric mopeds to the American market this year. Expect to see many more brands coming available over the next few years.

Until then, I have my Zoom Escooter, that isn’t perfect but is an affordable option.

It is nice to finally see the United States having more options for electric mopeds, finally. We’re a good 5-10 years behind the rest of the world in micromobility. It’s almost embarrassing. I hope we start catching up with the times soon.