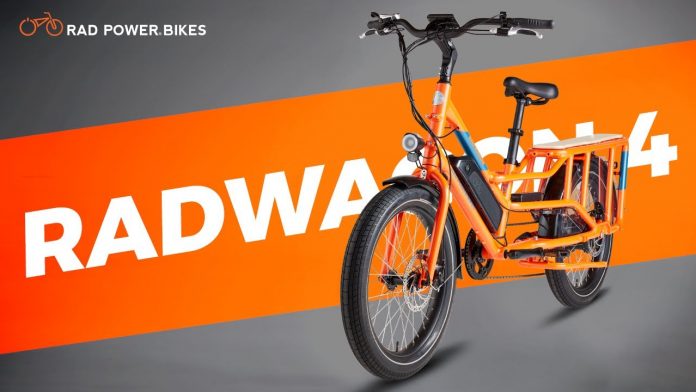 For the past several weeks I’ve been watching and reading every review that I could find for many of the most popular electric cargo bikes. I became interested in them because my grandson is now old enough to ride along with me, but I wanted a safe and comfortable riding experience for both of us. I looked at bikes priced from $1599 to $6000+ and settled on the RadWagon 4. Here’s why.

Since I plan to keep whatever electric cargo bike I chose to buy for several years, I wanted a bike from a company that I knew would be around for years to come. That was a major part of my reasoning.

I’ve made the mistake before of buying from an ebike company that later went out of business, and I didn’t want to make the same mistake twice.

Rad Power Bikes is the most popular ebike brand in the United States and have had millions of dollars of investments poured into it over the past two years alone. The company is just going to get bigger. I hope we’ll see mid-drive cargo bikes from them in the future. I’m sure we will.

Until then, the RadWagon 4 is still a terrific choice. The changes that Rad made to the overhauled design of the RadWagon 4 from previous versions were good ones.

A lower frame height, lower step-over height, shorter and wider wheels, a telescoping seat post to accommodate riders of nearly any height, and switching from a direct drive motor to a geared hub motor subsequently doubling the bike’s torque sealed the deal for me.

Direct drive motors are attractive because they’re quieter and more durable than geared electric motors, but on a cargo bike you need good torque to pull you up hills or take off with good power from a dead stop. Geared motors are more capable at these tasks.

I do encounter a few good size hills when riding. Even though much of Illinois is flat, the bike trail I frequently travel follows through hills and valleys. Those hills are the reason why I became interested in electric bike in the first place.

Will the RadWagon 4 do good on those hills? I’ll let you know.

And yes, the RadWagon 4 does have those custom 22″ x 3″ tires, but that didn’t scare me off. I think the size makes a lot of sense for a cargo bike. They add more comfort and stability. To be on the safe side, I ordered an extra tire and tube to have on hand for when I need them, just in case they’re out of stock later this summer.

In the past 5 years I haven’t had a single flat tire on any of my ebikes. Knock on wood. I don’t know if I’m lucky, or we just don’t have many thorns to worry about around these here parts. Probably both. But If you do choose the RadWagon 4, just have a spare tube ready. I have faith that Rad will keep continue to carry them for years to come.

Other Electric Cargo Bikes I Considered

I was very tempted by the Tern GSD and the Xtracycle sSwoop X1, even though they’re pricey. If a Tern dealer was nearby, I would have bought the GSD, but Tern only sells through dealers that don’t ship, and I happen to live in the middle of nowhere.

Maybe one of these days, or years, I’ll take the long 4-hour journey to Chicago and take a look at the Tern GSD in person. By the way, GSD stands for “get stuff done”. I love the size of it, its Bosch mid-drive motor, and the look.

I also liked the low rear passenger/cargo area of the Xtracycle eSwoop. It looks like it could carry not just a child but an adult comfortably. I was very close to pulling the trigger on it. Unlike Tern, they will deliver the bike fully assembled to your house. It’s an excellent bike, but I felt the RadWagon 4 was worth a shot because of the cost savings. It’s nearly $4000 less, so definitely worth a try.

Alternatives to the RadWagon

The RadWagon’s main competitors or alternatives based on similar price are the Blix Packa and the Eunarou Max Cargo. I think both of those bikes are definitely worth a look as well. You certainly can’t beat the price of the Eunarou Max Cargo for a fully outfitted electric cargo bike. I could have bought the bike and all the accessories I needed for it for $200 less than just the price of the RadWagon 4 without any accessories.

Did I make the right choice? We’ll find out. I’ll be putting together a full review, as well as being sure to share the stories of my summer journeys with it. I can’t wait to take my grandson out on his first ride!