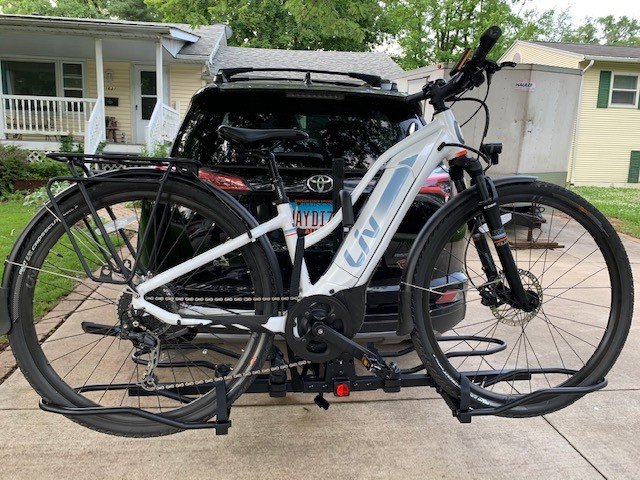 It’s probably going to happen. Once you have an electric bike you begin to think of all these wonderful places you can ride, such as beautiful state and national parks, or maybe just across town at a different bike path. To do these things you’ll need a bike rack for your car. Electric bikes require stronger racks than standard bikes. You may also want a rack that has a ramp, so you don’t have to pick up a heavier bike. There’s several options to consider, and we’re going to take a look at two of those options. One is from KAC and the other Thule.

First, I’ll share what bike rack I use, and it was one that I found on Amazon for a reasonable price. It is the KAC Overdrive K2 2″ Rack. It supports bikes up to 60 lbs each. Two bikes can be mounted on it for a total of 120 lbs.

I spent about $320 total to buy and have the receiver installed on a 2018 Toyota RAV4. Next month I’ll inquire on how much it will cost to have one installed on a Subaru Forester, since I no longer have the Toyota.

Anyway, you’ll obviously need a receiver hitch on your car for a car rack that can support the weight of electric bikes. I use a local shop that specializes in installing such accessories rather than a car dealer. That usually saves quite a bit of money. Whoever you use you want to make sure that they install the hitch that is rated for your specific vehicle.

Some cars can only support 1.25″ receivers and others can support either 1.25″ or 2″ receivers. It depends upon how much weight your vehicle is rated to support. There are different classes of hitches, and any reputable shop would know about this.

Most trucks and SUV’s can support 2″ receivers while sedans typically support 1.25″ receivers. If you need a rack for a 1.25″ receiver, KAC also offers this on Amazon. In this article you’ll see photos of the 2″ option, but the features are the same between the two.

The rack supports regular size tire and fat tire ebikes, as well as those with a step-thru frame. As it comes, it’s only able to support one step-thru frame and a mid-step or high-step frame bike. This is because the arms that hold the frame are on the same pole and have to be at different heights.

A way to get around this is to use a bike adapter bar. (Found on Amazon) to make a sort of faux high step bar. This allows you to use practically any type of bike rack with low step frames.

Using the KAC Overdrive rack becomes very painless. It’s not time-consuming to attach it to the car once you’ve done it a few times. I keep all the smaller parts in a box, so I don’t lose them. It’s not terribly heavy to lift to attach to the car. I’m able to do it myself as a petite woman.

If you’re going to be hauling more than one bike you’ll likely need help from another person for the bike that will be closest to the back of the car because it will have to go behind the vertical post of the rack. See the photo below.

It’s much easier to lift a bike onto the rack farthest from the car, and in front of the vertical bar, and that’s what I typically do. It would be better to have the weight closer to the car however.

If there’s anything negative I can about the KAC Overdrive rack is that it is difficult to place the bike nearest to the vehicle onto it because of its design. Again, it’s definitely doable with two people, but there are better bike rack designs for two heavy ebikes.

One that is very popular is from Thule. The Thule EZ Fold X2 has a lot of convenient features. It is twice as expensive as the KAC rack, but it may be worth the extra cost. It also can be used with both 2″ and 1.25″ receivers.

It doesn’t have a protruding middle post to work around, like the KAC rack, nor loose parts that may get lost eventually. It just folds up for easy storage.

The best thing about it is that it has built-in ramps that slide in and out. Nearly anyone would be able to roll even a heavier ebike onto it. It’ll save your back. This is the rack that I’ll likely be upgrading to in the future, but the KAC rack is doing the job.

Whatever rack you use make sure that is rated for electric bikes. Ebikes are heavier and often have wider tires. Standard bike racks won’t be strong enough for bikes.