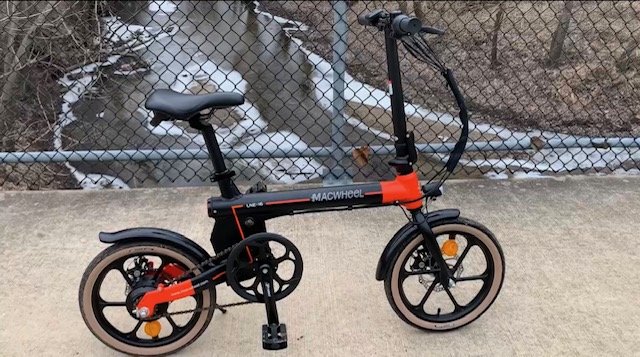 The Macwheel LNE-16, for 16-inch wheels, is an affordable and portable electric bike. I was curious how it would stack up against the Swagtron EB-7 Plus which I reviewed a couple of weeks ago. I’ll have a comparison between the two in a future post, but today I’m going to focus on the pros and cons of the LNE-16.

So, should you spend a little more and get something better or is the Machweel LNE-16 good enough? Let’s take a look.

Specs of the Macwheel LNE-16

This mini folding ebike has a 250 watt brushless rear hub motor and a single gear. While it is a small bike it can support up to 220 lbs. With 5 levels of pedal assist and a twist throttle you have several options for speed. The throttle even has an on/off switch to prevent unintended activation of the throttle. This is handy when moving the bike around.

I was pleasantly surprised by how well the brakes performed. This is an electric bike in which mechanical brakes work very well. For most ebikes which are heavier and capable of higher speeds I prefer hydraulic brakes, but mechanical on this bike is just fine.

There’s a rear reflector instead of a light. That’s a bit of a bummer because it’s located in a spot that would be great for a light, but the front light is integrated with the battery, and is plenty bright to be seen. It does have wheel reflectors which I like for safety.

The first thing I noticed when riding the Macwheel was the slight fishtail sensation from the rear. There’s only a couple of welds that connect the main frame to the rear, so there’s some obvious frame flexing going on. Once I got use to it, it wasn’t such a big deal.

However, trying to ride one-handed while recording a video with the other was a little unnerving at higher speeds.

It’s not a true folding ebike since it doesn’t fold in half but the stem can be folded down and the seat post lowered or removed to fit into smaller spaces vertically. It just barely fits into my 2021 Subaru Forester. I’d have to use some bungee cords to keep it in place because there’s not enough room to lay it down.

Of course, I could fold down the rear seats in the car and create plenty of space, but that only works if I don’t have a rear passenger which I usually don’t. I could easily fit two of the bikes in the back with the seats folded down.

It wasn’t overly difficult to lift the bike into my car, or carry it up and down my front porch stairs. It weighs around 40 pounds. If you had to carry it up and down several flights of stairs, it wouldn’t be the most pleasant experience, but the seat has a handle built into it which is helpful. You just want to make sure the seat post is securely tightened.

Of course, the bike comes with a charger, and it takes about 4-5 hours to fully charge. Range will depend greatly upon the weight of the rider, terrain, and the level of pedal assist used. Using the throttle will drain the battery more quickly, while pedaling along will extend the range. Macwheel claims a range of up to 37 miles but that would be with absolute ideal conditions and the lowest level of pedal assistance.

In my riding experience, range was more likely about 15-18 miles. That’s going up some rather large hills, testing out the throttle, and not trying to conserve much.

The display shows battery level and the level of pedal assist the bike is in. It doesn’t show speed. Holding down the plus (+) button will turn on an off the front light.

Top speed is a little over 15 mph which seems plenty on such a small bike. It’s very zippy. It doesn’t feel slow. The throttle speed depends upon the level of pedal assist. If you want top speed out of the throttle you’ll have to use PAS level 5. Usually, I prefer having access to top speed when using a throttle, but I think it makes sense with this type of ebike. It’s a good safety feature if kids or new riders will be using it.

While the bike doesn’t have front or rear suspension, it’s fairly comfortable to ride. I did take it over some wet, squishy, and rocky terrain, and it did good. It’s not designed for off-roading, but it’s capable of going across grass and gravel. I certainly appreciated the fenders when riding along a muddy part of a one-lane country road. Actually, the ride was much more comfortable than I thought it would be, considering the wheel size.

Adding a suspension seat post would make the ride even better. The grips aren’t the most comfortable, but it’s easy to change grips to something of your preference later.

Everything has worked as it should right out of the box. Speaking of that, assembly was very easy. The bike came almost completely assembled. All I had to do was unfold the handlebars, make some adjustments, and screw on the pedals. There wasn’t a single scratch or blemish on the frame.

So is this a good electric bike for the money? Overall, yes I think it is. The right components were selected for the bike considering its price. They’re not cheap components either. The 250 watt motor is plenty for the bike, and the gear ratio is spot on for 16″ wheels. It pulled me up some rather lengthy hills without issue.

One downside of it is that the battery isn’t removable, at least not easily removed, but this is common for bikes in its price range.

If you’re looking for a cheap portable electric bike then it’s a worth a look. If you can swing a few hundred more on a similar ebike I’d suggest the Swagtron EB7 Plus. The frame is solid, it has rear suspension, a removable battery, and overall it’s just the more comfortable, and I think safe bike between the two.

Still, Macwheel is making a name for itself with good quality affordable electric bikes, and electric scooters, so it looks like the company will be around for a while. That’s always something to consider when purchasing an electric bike. You want to make sure that there’s customer support long after the sale. I hope that will be the case with Macwheel.

View the Macwheel LNE-16 on Amazon.