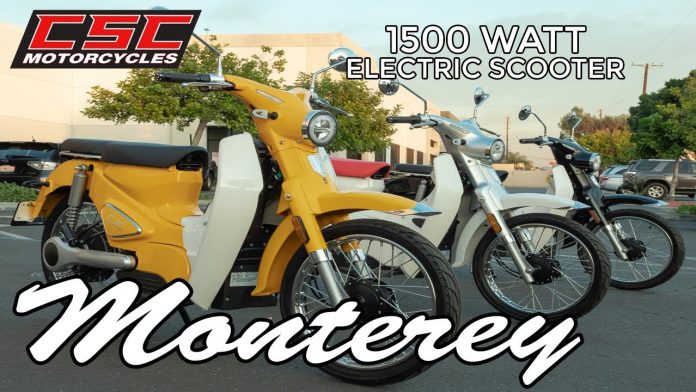 I don’t know if retro modern is a thing, but if it is the CSC Monterey electric scooter has got it going on. Sure, it looks a lot like a retro Honda Super Cub, but it’s a whole other critter beneath all of that sexy, molded plastic. Its all electric system will decrease your carbon footprint without sacrificing style or that cool factor. What it will sacrifice is a few miles per hour and range, but depending upon your needs it still might be what you’re looking for.

So what’s powering the CSC Monterey? Well, a 1.5 kW electric motor with 2.4 kW peak power is powering this charming and irresistible package. It also churns out 120 N.m. of torque which is plenty to scoot along most roads.

Top speed is 32 mph, and the range is estimated between 20-60 miles. Wait a minute. 32 mph? Is that enough? If you live in a city where a 30 mph posted speed limit is taken to mean 45 mph, then you’ll be getting passed a lot.

But the bike will get much more respect on the road than your typical electric bike. This is a DOT approved and regulated vehicle that requires registration. You won’t be relegated to the side of a city road with the broken glass and roadkill.

It reminds me a lot of the Juiced HyperScorpion electric moped which is also capable of 32 mph. The HyperScorpion is a hybrid electric bike/moped and because it retains pedals, and ships as a Class 2 ebike (wink, wink), it doesn’t require registration or a special license in many states. That’s a big advantage.

Another big advantage of the HyperScorpion is that you can ride it in a bike lane without too many complaints.

It has turn signals, horn, brake light, mirrors, and a 2000 lumen headlight, but it’s not DOT approved, so it’s in a bit of a gray area legally in many places, though I’ve had no problems riding it here in Central Illinois – mostly because most people here have no idea what it is.

What’s appealing to me about the Monterey is that it legally belongs on the road, just not a road with fast traffic, and that’s okay with me. I like cruising at safer speeds. I also like that it has substantial drum brakes that are up to the task of stopping a bike going 32 mph. The hydraulic disc brakes of the HyperScorpion do leave something to be desired at times.

The Monterey just screams southern California or Key West cruiser. It just screams happiness. How could one not be happy on that sunshiny yellow bike? It’s a comfortable ride with hydraulic suspension, bike size wheels, not your typical puny scooter wheels, and a low center of gravity due to the position of the batteries. It should be a very stable and approachable scooter, even for those new to such modes of transportation.

With a 300 lbs payload capacity you probably won’t have to go on an extreme diet to ride it either if you want to bring a passenger.

There’s storage beneath the mains eat and a couple of pockets up front to place a phone and/or sunglasses. It even has a USB port for charging your phone.

To be more environmentally conscious and save on fuel it makes a lot of sense to ride an electric scooter for short commutes that seem silly to take with a car. I’m very tempted by it. For others, it may not have enough speed.

If that’s the case CSC does have a faster electric scooter called the Wiz with a top speed of 43.5 mph. It also has more storage, and I guess I’ll force myself to admit it’s the more practical of the two, but it’s not nearly as cool as the Monterey.

As an owner of a Juiced HyperScorpion with a very similar top speed and range of the Monterey, there are some features that I wish the HyperScorpion had.

I love the center speedometer display and button clusters of the Monterey. The controls for the HyperScorpion are a mishmash of ebike and moped controls, and all that stuff gets crowded on the bars. It makes for a long reach from the handlebar grip to activate the turn signals or use the horn. That’s not the case with a traditional scooter.

Okay, the Monterey isn’t a traditional scooter, but it borrowed the best from those retro scooters. CSC also managed to match today’s technology very well with yesterday’s tried and true functionality.

So, do I keep the HyperScorpion or go for the Monterey? Or do I wait for a faster Monterey? Hmmm…..

One thing is for sure, electric transportation is here, and it’s going to keep getting better.

Check out the CSC Monterey.