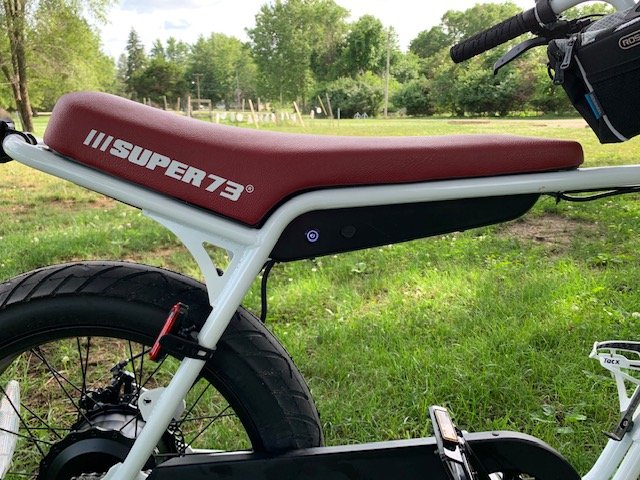 The Z1 from Super 73 is their most affordable electric motor bike.  It’s short in stature with a seat height of only 27 inches but I soon found out that is why I love it so much but much more on that in a bit.  It also doesn’t have the bells and whistles of many of today’s ebikes, and certainly not the higher end components or specs but that’s not necessarily a bad thing and I’ll elaborate more on that too.  Full specs are at the end of this article.

The first time I laid eyes on the Z1 in person I wasn’t impressed to be honest. It was a bit of a let down.  I thought it was too small, even though I’m only 5’1″.  It doesn’t have lights, a display, shifters, or any of those things I’m used to seeing on an electric bike.  In fact, it didn’t really look like any electric bike I’ve ridden before.

I was expecting a very harsh ride from the lack of suspension but was surprised by how well the fat tires absorbed most of the bumps.  The ride wasn’t harsh at all.  The banana style seat isn’t exactly a fluffy cloud to sit on however. 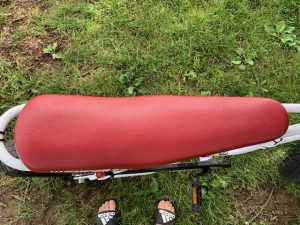 It’s harder than it looks but having the ability to slide back and forward on the seat throughout the ride allowed me to distribute the pressure a little better instead of constantly having it concentrated in the same area.  Bikes with a very upright riding position become very uncomfortable after a while.  The riding position on the Z1 has the rider leaning forward more and putting some weight on the grips.

This helps distribute your weight a little better for a more comfortable ride.  Don’t get me wrong.  Riding the Z1 for hours will probably leave you limping like a one-legged pirate but for shorter trips zipping around town, I find it actually pretty comfortable but you might need to become acclimated.

I’d also recommend wearing bike gloves when riding as the grips don’t offer much cushion.  They also have an aggressive grip texture which is great for safety but a little rough on the skin at the same time.  Newer editions of the Z1 may come with a different grip, so keep that in mind. 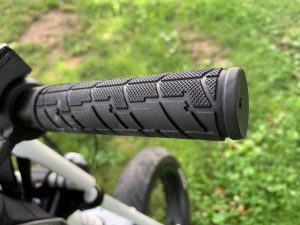 For me, the best thing about the Super 73 Z1 is the low seat height.  Yes, it’s great for me because I’m short but it also makes sense once you understand the whole concept of the bike.

The Z1 is an easy to control electric motorbike.  Some ebikes are the complete opposite.  I almost feel like I’m riding a wild horse with some of the large speedy ebikes out there today.  I feel a bit at their mercy as a rider.

Many ebikes are heavy and tall which makes handling more challenging.  My first electric bike was a cute little folding bike but I soon found out that just because a bike looks cute and small doesn’t mean it’s right for a petite rider.  I nearly wiped out on it several times.  I dreaded starting from a dead stop, especially in front of other people. 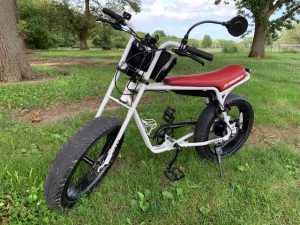 Consider a sports car.  They’re low to the ground for a reason.  One is better aerodynamics but the other is gravity.  Having a lower center of gravity helps prevent rollovers.  The same is true of the Z1.  The low center of gravity prevents wobble and makes the bike less likely to tip or slide out from underneath you.

The short crank arms also struck me as odd at first but they also make sense on a bike with low ground clearance because they’re less likely to hit the ground when you lean the bike in a turn. 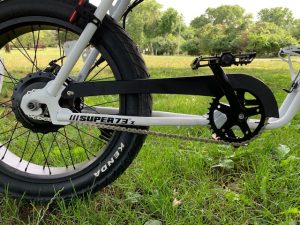 This is the first bike that I’ve owned that I feel fairly confident in leaning a little more than I’m used to on curves.  The slick tires help in that regard though you don’t want to get overconfident because loose gravel or slick pavement could spell disaster. Still, I feel more confident on the Z1 than any other bike I’ve tried.

Now I know how normal height people feel on bikes.  You guys have had it easy!

The Z1 is not a bike for pedaling.  Really, for pedaling to be practical a larger chain ring with longer crank arms are needed.  Of course then you’d have to be careful that the pedals didn’t contact the surface when turning.

Also, this just isn’t the bike that you’re probably going to want to pedal anyway.  There’s other ebikes much better suited for that. 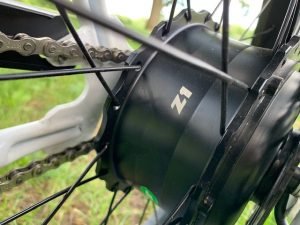 The motor on the Z1 is louder than any other ebike I’ve owned which is a bit of a turnoff.  I do wish it was quieter but I’m used to it now.  At least people will hear you coming. It’s not super loud, just louder than I’m used to.

The 500 watt motor is plenty enough to zip me down the road and up some decent hills.  Even on fairly long and gradual hills it can maintain a speed of about 18 mph.  I weight about 150 lbs. On steeper hills it won’t go quite that fast but it still gets me up them but too many hills will drain the battery pretty quickly, so if you live in a hilly area keep that in mind.

While the motor tops out at 20 mph, (actually I measured it at 21) it’s readily apparent that it’s capable of more.  By snipping a certain wire in the controller, others have reached 26 mph.  If I get brave enough to snip wires, I’ll be doing the same.

The bike doesn’t have the most impressive torque in that it takes off strong.  It’s much more subtle when taking off which I happen to prefer.

I’ve learned to appreciate that the throttle isn’t the jackrabbit variety.  It’s great for easing the bike up the driveway and into the garage between vehicles.  I wouldn’t even attempt doing that with my other ebikes with much more touchy throttles.

This makes the bike ideal for kids and those new to motorized bikes.  It’s very approachable but not in a grandma lame kind of way.  Although as a grandma I don’t consider myself lame.  I ride the Z1 after all!

The bike is a head turner for sure.  It just looks like a cool bike for cool people or at least people who like to have fun.

The 36 volt battery is a bit lackluster.  It’s the one thing that I would want to change, not so much for better performance but for longer range.  A 48 volt battery would be more ideal or having dual batteries would also easy my range anxiety.

If you’re the type that likes to modify bikes, you’ll love the Z1.  There’s several tutorials online and on YouTube to upgrade the bike including unlocking higher speeds, adding or replacing the battery, and upgrading to hydraulic brakes.

On that note I’m happy with the brakes.  The brakes on the bike came adjusting very well and they have good stopping power but I will probably upgrade to hydraulic down the line because they’re less maintenance and more reliable down the road.

The bike weighs 53 pounds which isn’t too heavy for me to lift onto my car’s rack by myself.  I plan to take several trips with the Z1 to local state parks and natural areas to ride the lower speed roads that snake through them.

Overall, I’m happy with the bike.  Again, if you want a bike you can pedal this isn’t the bike for you.  If you’re wanting a bike to commute to work, school or just have a fun time with it’s worth considering.

The bike is fairly easy to maintain.  There’s not many wires to be concerned with.  It’s a good bike to learn how ebikes work because you don’t have to worry about too many non-ebike parts like derailleurs, multiple gears or shifters.  If you like tinkering around in the garage, you’ll probably like the Z1.

Most owners personalize and modify their bikes to their liking.  Some have increased the speed, or added a second battery, added lights, vinyl wrapped it, upgraded to hydraulic brakes or you name it.  The bike becomes a hobby to many and a way to connect with others in the biking community. 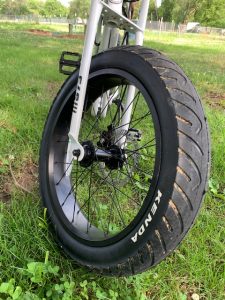 Biking is about more than the ride or even the bike.  You find that out pretty quickly whether you have a Super 73, a Rad Power Bike, a Trek, a Giant, a Juiced or whatever.  It’s a new lifestyle.  Of course, you can be a lone wolf too.  Whatever the case, you’ll want to ride much more often and farther than you probably ever did on a non-electric bike.

For more information on the Z1, visit Super 73’s site.  If you would like a $100 discount on any of their bikes, click here.  I’ll also get a $50 referral fee.  Any Super 73 owner can earn a little money by referring others who then purchase a bike.  It’s a nice perk.