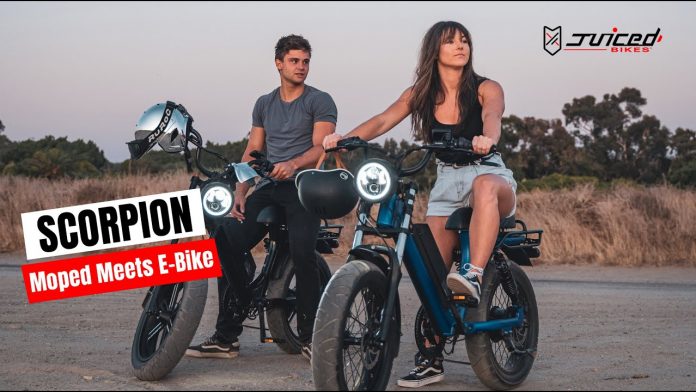 Micromobility.  The first time I became acquainted with the idea of micromobility was when I first saw the promo video for the Juiced Scorpion, a moped-style electric bike from Juiced Bikes launched on Indiegogo in the fall of 2019.  I quickly became an early backer.

Dwellers of larger cities are likely familiar with the term, or at least the concept of micromobility, but for a small-ish town in the Midwest, commuting by bike isn’t really a thing.  Sure, there are some who commute by bike but it’s rare here.

So what is micromobility?  Micromobility is travel usually within densely populated areas using ebikes, scooters, skateboards, bike share services, etc.  It’s fairly common in large cities but much more rare in mid to small cities in the US.  That doesn’t mean such cities couldn’t benefit from investing in micromobility.

Many of the commutes in a city the size of Decatur are less than 5 miles.  Shopping centers and workplaces are typically not far from where people live.  Public transportation, mainly the city’s bus service, is typically used by lower income individuals and elderly citizens who maybe can’t afford a car.  Public transportation is generally not used by middle to upper income families.  So it would make sense to focus on a product like the Scorpion and other electric mopeds for this demographic.

Instead of e-scooter rentals, privately owned mopeds and electric bikes make more sense.  However, a network of bike paths and safe bike lanes are needed to make micromobility possible.

E-bike rental companies couldn’t succeed here without such infrastructure and citizens wishing to ride their bikes to work find it very difficult to do so safely.

Many cities in the Midwest aren’t bike friendly.  The cities were built and designed around the use of cars, not walking or bike riding.  Few roads have room for a bike path and even sidewalks are scare in neighborhoods built after the 1950s.

Yeah, I guess we figured nobody would ever want to walk or ride a bike again once America fell in love with their vehicles and moved to suburbs with their longer commutes to work.

For a city the size of mine, about 73,000 in population, micromobility using commercial services doesn’t exist.

Only in the past decade or so has biking become a popular recreational activity.  With the creation of a bike path linking a conservation area along much of the western edge of the city, biking has become BIG.  The path is currently being extended to connect Decatur with its neighbor to the north, Forsyth.

Yes, we love our bike path but it sure would be nice to use our bikes for something more, especially for those of us with electric bikes, and even more so for those of us with moped style ebikes.  With a regular bicycle navigating city streets amongst traffic can be treacherous, no, is treacherous in this town, as it is in many towns that aren’t bike friendly.

That’s one of the reasons I was immediately attracted to the Juiced HyperScorpion.  It has enough speed to keep up with slower city traffic and the form factor to stand out on the road as something more than just a bicycle.

In other words, I’ll have less chance of being run over!

So many might ask, “Why not just get a moped or motorcycle?”  Well, because electric bicycles are more approachable, can go to places that gas powered mopeds can’t legally, are environmentally friendly and cheap to operate, don’t require a special license or insurance (in most cases), can be pedaled for exercise and well, they’re just plain downright fun.

There are other moped-style electric bikes from Super73, Monday Motorbikes, AddMotor, and even the RadRunner from RadPowerBikes which I currently have but none of them captured the look and function of a moped as well as Juiced has with the Scorpion.

The Scorpion and HyperScorpion were heavily inspired by the popular 1970s Tomos mopeds.  I remember mopeds being popular when I was a kid in the 1970s and early 80s.  I thought they were cool then and I’ve always wanted one as an adult.  I was also in the market for a full suspension ebike after enduring the jolting ride from a folding electric bike.  Enter the Juiced Scorpion.

I’ll likely be the only one in my city with the Juiced HyperScorpion but I will be happy to promote this new take on electric bikes.  Heck, even electric bikes aren’t really a thing here.

I’ve seriously considered having business cards printed up to hand out to those asking about my ebikes.  Most people here have never seen them or even knew that they were a thing.  Yeah, we live sheltered lives here in the Midwest.

My HyperScorpion should arrive in July and I can’t wait.  It’s been a long journey watching the progression of the Scorpion and HyperScorpion, as a backer.  There were long production delays due to Covid-19 but following its progress has been a  welcome distraction in such a crazy year.

I’ll be an advocate for micromobility in my town.  We need bike lanes and secure places to lock our bikes.  That’s been a concern of mine since I chose the HyperScorpion.

Sure, I could ride it to work, only a two-mile commute, but I doubt the bike would still be there when my shift ended. I also worry whether the bike will be welcome on that lovely bike path or will people call the park police thinking I’m riding a motorcycle.

Well, I kinda will be but I won’t be riding it like a jerk.

That’s one of the drawbacks of moped style ebikes.  They haven’t carved out a niche just yet because they’re so new.  In fact, in Illinois the HyperScorpion doesn’t firmly fall into the ebike or moped category.  It’s kinda in a gray area of the law.  The Scorpion with its 750 watt motor does fall into the Class 3 category for ebikes.

Actually, I wouldn’t mind having to register, license, and insure the HyperScorpion if required to do so.  I’d feel like the bike would be more respected on city streets and offer a little more legal protection in the event it was stolen.

But I guess I’ll be a pioneer with my bike and let the chips fall where they may.  I can embrace the rebel in me and risk it.

Anyway, if you would like to learn more about Juiced Bikes check out their website.  You can also view their YouTube channel and see how the HyperScorpion progressed over the past few months.  It wasn’t an easy road.

Check back because I will have a full in-depth review of the HyperScorpion from an owner’s perspective.  I can’t wait to ride it and share the experience with you!

Specs of the Juiced HyperScorpion