Back in August of 2019 Rad Power Bikes released their new to the market RadRunner, part cargo bike, part commuter, part moped.  It didn’t look like anything else, and honestly the first time I saw it I wasn’t impressed by its looks because it was so unorthodox.  It wasn’t love at first sight but I kept coming back to it because of the unique experience the bike has to offer.

Something I did like right off the bat was how easy it is to modify the RadRunner with the available accessories including a passenger seat, a front rack, baskets, and even a center console for storage.

It’s fun to own simply because you can make it your own by reflecting your own style and personality.  I belong to a RadRunner community on Facebook and there are plenty of examples of how people have modified their bike.

One member has made his bike look like a WWII Army motorcycle.  Another has added turn signals, new lights and even put a hinge on the passenger seat for storage underneath.  If you are the mechanical type who likes to tinker you’ll love the RadRunner!

Since the color scheme is orange and black it’s perfect for my alma mater —  Oregon State University.  I have Benny the Beaver vinyl decals on order as I’m typing this.

But let’s get to the specs of the bike.

The RadRunner features a 750-watt geared hub motor, a 48 volt, 14 amp hour battery, and a range between 25-45 miles between charges.  It also has a 300 pound weight capacity, 4 levels of pedal assist and a twist throttle with a max speed of about 20 mph making it a class 2 ebike.

I can attest to the claimed 45 miles between charging because that’s about what I’ve been averaging.  I normally use the first couple levels of pedal assist, higher levels for hills, and occasionally throttle only.

The RadRunner is built like a tank with a beefy downtube and substantial 25.5 mm size tubing diameter for the rear rack.  This strength allows for a passenger and/or plenty of cargo. 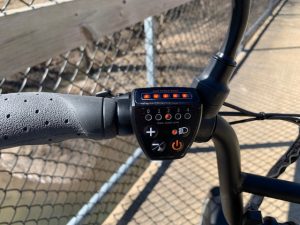 The RadRunner weighs about 64 pounds without any added accessories so it’s not the easiest to get up and down stairs.  I was able to do it by myself but I sure wouldn’t want to do it very often.

For $99 you can order the upgraded display and some riders have noticed a little more torque and slightly higher speeds from the upgraded display.  I’ve had the bike up to 22 mph using throttle only but speed is affected by many different factors such as rider weight, terrain, tire pressure, wind, etc.  Your results might be different than mine but I would expect 20 mph for most riders.

Fenders are $89 and do the job.  I would prefer that they came installed on the bike because installing the back fender requires removing the back wheel which may be intimidating for some.  I was able to do it by myself but it required some patience.

I also added the passenger seat which is easy to install.  I haven’t tested it with a passenger but I have sat back on the seat myself for a true moped riding experience which is a lot of fun.

Because the large diameter of the tubing standard panniers may not fit but there are creative ways to get around that.

Getting Creative with the RadRunner 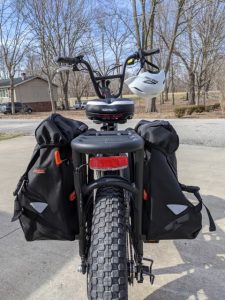 Above photo:  The RadRunner equipped with third-party panniers and a new seat before I installed the rear fender.  The panniers above from Ibera purchased from Amazon match the bike’s color scheme perfectly!

I did have to rig up a way to attach those panniers but the system was simple. Some strong zip ties and some quick release chain links did the trick.  The bags are held nicely to the bike.  I actually got this idea from someone else and that’s why it’s a good idea to belong to the Rad Power Bikes Owner’s Group on Facebook or the RadRunner group to share and read tips from other riders and feel like part of a community. It’s fun to share photos of modifications and/or the adventures we have on our bikes. 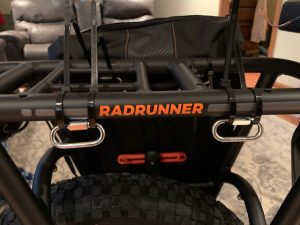 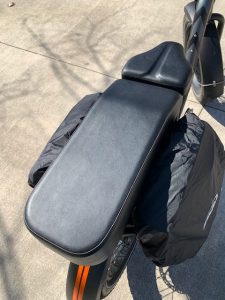 Btw.  I added the orange pinstriping on the rear fender.  The fenders are all black and I wanted to add some more visibility to the back of the bike.  It is reflective orange tape that I found on Amazon and matches the bike well. 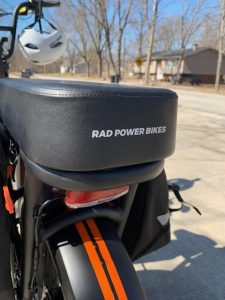 The 3.3″ wide tires with their somewhat aggressive tread hum on the pavement.  It’s not the quietest bike I’ve rode but the increased tire width provides good stability and the air volume does a good job as shock absorbers. The tires, made by Kenda, have included puncture resistance built in too.  I haven’t heard of anyone having issues with the tires thus far.

I took the RadRunner on a gravel road but I quickly learned that this is a bike meant for pavement or more compacted soil conditions.  The bike is strong enough to handle it but since there isn’t any suspension it wouldn’t be a comfortable ride to say the least.

So consider yourself warned, the RadRunner is meant for pavement although I have ridden it through grass and thawing soggy soil and it had plenty of power.

The RadRunner is advertised to accommodate riders from 4’11” to 6’2″.  For me at 5’1″ the seat has to be lowered to nearly the lowest it can go in order for my feet, or at least one of them, if I tilt the bike slightly, to reach the ground.  My inseam is 28″ and those with shorter inseams would probably struggle with this heavy bike.

Taking off on the bike requires a bit of a learning curve if you’re new to ebikes.  Since electric bikes are much heavier than non-electric ones, it can be difficult to start from a complete stop since it requires more force in those first few pedal rotations.

Now that I’ve had the bike a while I often use the throttle on take offs and it’s really the better option — once you’re used to the bike.

The RadRunner has a cadence sensor which use magnets that detect when the pedals are being pedaled.

The motor kicks in at about half a pedal stroke which is ideal.  You wouldn’t want it to take off immediately with the slightest pressure on the pedal for safety reasons but it does start the motor soon enough after pedaling to have a smooth and safe takeoff.

Pedaling the bike is surprisingly good.  I’ve been able to get a nice workout with good leg extension.

Is having just one gear a problem?  If you live in a very hilly area it might be.  I don’t live in a hilly part of the country but I do encounter some killer hills.

I have to admit I wish the RadRunner had more gears but using level 3 or 4 pedal assist or the throttle gets me up the hills just fine.

Pedaling the bike without the motor is surprisingly doable on flat pavement.  If there’s any kind of incline you’ll need some strong legs!

The bike arrived quickly and without any damage from FedEx.  It was shipped all the way from Washington state, where Rad Power Bikes is located, to Illinois in about 4 business days.  Rad also has a terrific way of tracking your bike as it ships.  You’ll see where it is each day on a map which is helpful.  I’d also recommend signing up on FedEx’s site to get text notifications.

You’ll need to sign for the bike and any accessories when they are delivered which may require some planning.  I was at work the first day FedEx tried delivering and luckily home the next business day.

Out of the box the RadRunner wasn’t difficult to assemble.  You’ll need to put the front wheel on, the handlebars and the pedals.  How-to videos are available on Rad’s website and YouTube channel.

Pros of the RadRunner include how easy it is to modify or personalize, cargo carrying ability, a strong frame, good gripping tires with puncture resistance, the ability to have a passenger, wide stable tires, front and rear lights wired into the battery, a brake light, reflective sidewall striping for safety, plenty of mileage between charges, and a unique design that turns heads.

Cons of the RadRunner would be that it only has one gear, there’s no suspension, the seat is one you’ll probably want to replace, fenders are extra and not the easiest to install, and having to pay $99 more for a display that comes with other Rad bikes kinda stinks.

UPDATE:  The RadRunner dropped in price by $100 to $1199 since I purchased it so even if you add some accessories the price is still reasonable.  There’s also a new RadRunner in town, the RadRunner Plus which has front suspension, an upgraded light and gears.  It goes for $1699.

Still, I’m happy with the RadRunner.  I’ve totally fallen in love with moped style riding.  It puts me at a comfortable upright position ideal for taking in the scenery and seeing traffic.

I like the larger size of the bike as well.  Motorists pay attention to me riding on the side of a road because it looks more like a moped or small motorcycle, especially when equipped with panniers.

Improvements I’d like to see for the RadRunner would be a quieter motor though it’s not that loud, factory installed fenders, upgraded display standard, a more comfortable seat.  It would also be great if the back rack had drop bars with standard size diameter tubing for panniers.

All in all though I enjoy riding the RadRunner. It’s become a fun pastime and hobby, more so than other bike has been.  The RadRunner community is friendly and helpful. Rad Power Bikes is an established and growing company so finding parts for the bike in the future should be no issue.  That’s something to always consider when purchasing an e-bike.

The RadRunner may not have been love at first sight but I’m hooked on it now.  Rad on!