I have reviewed many smartwatches and have seen them evolve but over the years I’ve come to appreciate certain features over others. What matters to me is accuracy, build quality, reliable notifications, appearance, good basic fitness features, and most of all battery life.

Okay, I know this isn’t too surprising but the Apple Watch is still the best smartwatch that money can buy.  While no smartwatch is 100% accurate 100% of the time, the Apple Watch has very stable software.  It’s not glitchy like Wear OS.  It just works.

I love that I can answer phone calls and reply to text messages through it.  I miss those features when I’m wearing another smartwatch that doesn’t have this ability.  It’s so handy and with the cellular version to leave my phone at home but still have the security of knowing that I can make a call if I need to.  It’s very freeing since most of us are glued to our smartphones in a very unhealthy way.

But there’s one thing that I don’t like about the Apple Watch and that’s battery life.  It’s simply annoying to have to charge it everyday especially since I have watches that have so much better battery life.

I still wear the Apple Watch quite often because it does so many things so good but I just wish battery life was better.

If my primary phone were a Samsung or another Android, this is the watch that would be on my wrist much of the time.  It does many of the things that the Apple Watch does with better battery life.

It has the fitness features that I like and a gorgeous display with tons of watchfaces to choose from.  Unlike Apple, Samsung supports third-party watchfaces.

The only major thing that needs improving is more third party app support.  Once Samsung has improved in this area then the Galaxy Active 2 is going to be right there with the Apple Watch.

There’s also a cellular version of the Galaxy Active 2 and personally I think the mic and speaker sound better than the Apple Watch Series 5.

It’s a terrific choice for a full-featured smartwatch for those that don’t have an iPhone.

For outdoor fitness tracking, and many outdoor gym activities as well, there’s simple nothing better or more capable than the Garmin Fenix.  From hiking, to kayaking, to bicycling, to running on the treadmill, and my gosh you name it, it tracks practically any activity you can think of.

There are newer versions of the Fenix but I haven’t upgraded yet because I’ve been happy with the Fenix 5s and that’s a good thing.  I don’t feel compelled to upgrade every year because the watch is already so solid for what I use it for.

The Fenix is a pricey watch so that’s another reason that I haven’t upgraded it but even if it wasn’t so expensive I don’t feel like I’m missing much from newer models.  Garmin is good for supporting older products with continued updates so while it was more money than a Garmin Vivoactive or Forerunner, it’s a watch you can live with for a number of years which will save money in the long run.

And the best part is now that the Fenix 5 and 5s have been out for a few years the price has dropped significantly.  It was originally a $700 watch and now it’s about half that price which is a great deal for what you’re getting.  If you don’t need maps or support for onboard music then there’s little reason to pay more.

The Fenix 5s is my go-to GPS watch.  It’s the one I use to test other watches accuracy against.  No it’s not 100% accurate either but it’s pretty darn close and it has good battery life as well.  The transflective display is perfect for the outdoors and it’s solid build can take plunges in a lake or pool.

The only area where it falls short for my daily use is the ability to respond to notifications or answer a phone call through it.  Since I’m not hiking or biking every day of the week, it’s not my daily watch but it is the one I go to when I want the best data from my workouts and outdoor treks.

Okay, now we’re finally getting to the part of the list that isn’t so predictable.  Almost everybody knows that Apple, Samsung, and the Garmin Fenix are top of the line but there are other options that I really enjoy using and the Fossil Hybrid HR is one of them.

I wear the Fossil Hybrid HR because I love the looks of it, the battery life is terrific, the e-ink display is neat to me, and it just looks so good on my wrist.

Most of the time I just need a watch that tracks my steps, shows notifications, and my heart rate.  I also like that it shows the current temperature and date at a quick glance.

And it’s those basic features, like telling the time, showing the date, my step count, and the temperature that I really care about 90% of the time.

Yes, it does support a limited number of fitness activities but I don’t use it in the gym.  It’s more the watch I use to track my steps when I’m working, shopping, running errands, and all that kind of stuff – you know the stuff we’re doing most of the time.

When I’m at the gym, I’ll choose a watch that is better for the gym like the Apple Watch, Samsung Galaxy Watch Active 2, or Garmin Fenix.  Now, obviously most people aren’t going to have as many watches as I do so you’ll need to choose one or two that are going to fit your particular lifestyle and needs.

If one of those needs are a more classic looking watch with smartwatch features and great battery life then the Fossil Hybrid HR Charter edition (the one shown here) and the Collider (the black or men’s version of the Hybrid HR) are both good choices.

I think future versions of this watch are going to be even better as it could use a more intuitive menu system and some other tweaks.

Okay, it might be because I backed this crowdfunded watch on Indiegogo and also own the first version but I really, really like the idea of never having to charge my watch and the Matrix Powerwatch 2 is trying to make that happen.

When I backed it, I was mostly interested in the technology that powers it which is solar and body heat.  I wanted to see this be a successful endeavor so it can free us from charging cables. 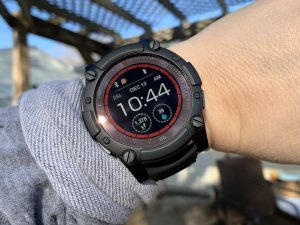 The first few weeks with the Powerwatch 2 were rocky with unstable software and glitches galore but it has become much more stable with each firmware update.

The GPS is surprisingly decent although the heart rate sensor leaves something to be desired.  It’s great for resting heart rate but not that great for intense workouts.

Still, I enjoy wearing the Powerwatch 2 even though it’s very masculine in appearance which would be fine if I were a guy.  I wear it quite a bit because I don’t have to charge it, at least not the conventional way plus I don’t mind wearing large watches. While it is a large watch, it’s not heavy.

It’s going to be great in the summer when I’ll be outdoors in the sunlight.  In the wintertime I could rely more on body heat but I really don’t want to sit outside in the snow to charge my watch so setting it in the window on a sunny day once in while has been enough.

I’ve only had to use the charger once in the past two months and that was more because of a software glitch rather than the battery being low.  Once it’s more stable I’ll very rarely need to charge it – at least that’s what I’m hoping.

It does show notifications and supports a limited number of fitness activities but the fact that I don’t have to plop it on a charger every day or even every week or possibly even every month or longer (it does come with a charger and might need a jumpstart once in while) is so terrific!

Battery life has become the number one feature for me.  Yes, the Apple Watch rocks but boy it’s a bummer to charge it so dang much.

So what’s my favorite smartwatch of all time?  This is no surprise as it’s the favorite of many and that’s the Pebble Time.  It was such a charming and interactive watch with good battery life. It’s hard to explain the love affair but I’m not the only one that fell in love with that watch.  When something clicks it just clicks and there’s no going back.

Both the Fossil Hybrid HR and the Powerwatch 2 have a little bit of that Pebble-like magic to me.  Maybe it’s just because I like rooting for the underdog.