I am eagerly awaiting the Juiced HyperScorpion electric bike that I backed on Indiegogo a few months ago.  This is a moped style ebike with a 1000 watt motor, a top speed of about 35 mph, and a 75 mile range from its powerful battery.  As cool as the bike looks and as fun as it will be to ride I’m left with the problem of finding places to ride it.

E-bike laws vary from state to state and city to city.  Public sentiment of e-bikes is also all over the place from those welcoming the non-polluting form of transportation to that that view e-bikes as a public menace terrorizing pedestrians and turning up the noses of traditional bike puritans.

I haven’t had any issues riding my folding Ness Icon on the trails.  Well, okay there have been a few grimacing snooty snarls from a few people but I just ride by and give them a smile because I know that burns them even more.

But that’s not going to work with my HyperScorpion – my cool, totally rad (oops that’s another e-bike company), awesome electric machine.  I can’t ride it on the bike path and I would agree it doesn’t belong there.  I wouldn’t want our quiet bike path snaking through natural areas to become clogged with e-bikes going 35 mph.  That’s not a good mix with pedestrians, nature enthusiasts, and children. 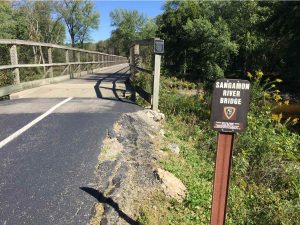 Now bike lanes along city streets is another story but my city doesn’t have many roads with bike lanes.  In fact, I’d say that Decatur, Illinois, besides the bike path, is very inhospitable towards bikes and pedestrians.  Many of our major roads don’t even have sidewalks, let alone bike lanes.

I plan to ride it on secondary city streets but I want to explore more places.

So now I’ve been scouting out local and not so local areas that I can haul my bike to and enjoy more intimate and scenic routes on weekend getaways.

So where are the e-bike friendly places around these here parts?  Good question.

Many campgrounds are e-bike friendly.  Folding e-bikes are becoming very popular with RV-ers but I don’t have a RV.  Instead, I’ll be looking for cozy cabins, bed and breakfast accommodations and/or lodges nestled in or near nice places to roam.

Smaller touristy towns are a good place to look.  My mind keeps going to Traverse City, Michigan, although I did see a bicyclist get hit by a car while vacationing there.  This was just a regular bicycle and luckily the rider jumped off the bike before it was pinned beneath a large luxury car whose driver had apparently not been paying attention to the road.

And that’s one of the reasons I went with the speedier HyperScopion so I don’t have to ride along the side of the road and get clipped by knucklheaded drivers.  I nearly got hit last year on a residential street near my house.  I want to stay ahead of the traffic and ride down the middle of the lane as if riding a motorcycle.

Last year the National Park Service decided to allow ebikes on most of their trails.  Every national park I’ve been to also has low speed roads winding through scenic routes.  These would be ideal for a bike that can easily go 30 mph with or without pedaling.

But that leaves some gray areas for a bike like the HyperScoporion that is capable of 35 mph. Is it still allowed by national park standards?  Yes it’s capable of going over 28 mph but I wouldn’t be foolish enough to ride above that speed on a bike path.  I’ve about been taken out by squirrels, rabbits, wet leaves, and walnuts on my folding e-bike in which I average about 12 mph.

So is it what the bike is capable of or is the speed that bikers ride?  Uhm…

It’s my understanding that it’s what the bike is capable of which fails to consider that cars are capable of going over 100 mph but are still allowed in 20 mph school zones.

It’s all these gray areas that current e-bike laws don’t take into consideration and that’s because the law is often so slow to adapt to new technologies.  Not many e-bikes could go above 28 mph until recently.

Whatever the case, I’ll be scouting out and visiting some local e-bike friendly parks and towns and reporting back.  Hey, it’s a good excuse to enjoy a weekend.  It beats my usual weekend routine of standing in line at Walmart to buy cat food.

Do you know of any great places to ride in or near the Midwest?  And not just for a bike like the HyperScorpion but also e-bike’s like my Ness Icon that has a top speed of 20 mph. I’d love to read your e-biking experiences!