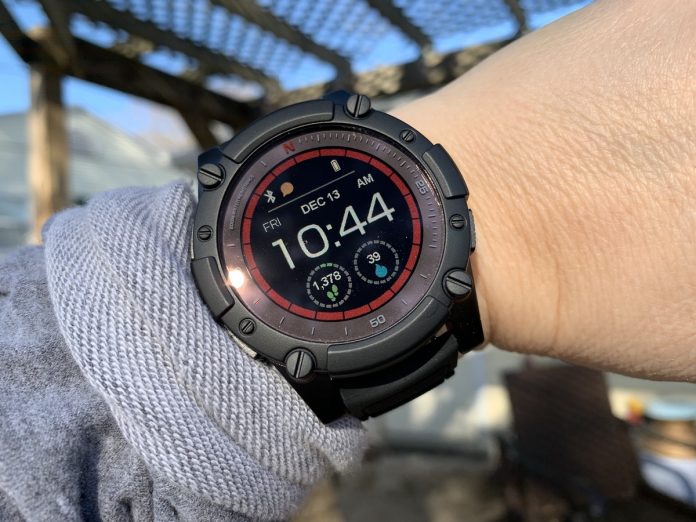 Way back on January 6, 2019 I became a backer of the Matrix PowerWatch 2 on Indiegogo.  This week, the second week of December, nearly 11 months later I received the watch.  This is the second PowerWatch that I’ve owned, with the first one being little more than a pedometer that told time to now the second series of the PowerWatch equipped with a heart rate sensor, built-in GPS, a color screen, support for more activities, notifications, and oh, it also never needs to be charged.  Well, maybe not never but close to it.

The first PowerWatch used body heat exclusively to charge the internal battery which didn’t give it quite enough juice for being much more than a pedometer.  This time around, in addition to body heat, solar power is also used to charge the battery.  This gives the watch enough power to utilize a heart rate sensor and GPS.

While the Apple Watch Series 5 is usually the watch on my wrist, it spends a lot of time on the charger.

This is the reason why I often grab a different smartwatch that requires far less charging, such as the new Fossil Hybrid HR, or the Amazfit GTR.  Neither are as capable as the Apple Watch but I can usually rely on them to be ready when I need them.

The PowerWatch 2 is the dream of smartwatch wearers. It never needs charged by a cord.  Okay, maybe not never but close to it. As long as I wear the watch or keep it in a sunny spot, it’ll always be ready.

The PowerWatch 2 is a large watch with a 47mm case and a 16 mm thickness but it is lightweight and surprisingly comfortable for the hefty size.  My plans for the watch are for outdoor usage such as hiking and biking.  It’s simply too large on my wrist to wear for some occasions.

It’s hard to get sleeves over it and its rugged masculine design is more fit for the woods than the office, at least on a woman’s wrist, though I do enjoy wearing it when out and about running my daily errands.

It has some pretty impressive specs too including a 200 meter water resistance rating, sapphire glass which should be crack resistant even in tough conditions, and a titanium case is even available, although I chose the base model.

The display has a solar ring around it, giving it a unique look and also reminding the wearer of the technology under the hood that powers their watch.

Thermoelectric power is made possible by body heat.  As long as the bottom of the watch is warmer than the top, heat passes through and some of the energy from this heat is used to charge the battery in addition to solar energy.

The mobile app will show you how much energy has been harvested from solar and body heat which is interesting, especially if you’re a tech geek like me.

It’s that exactly what made me want to become a backer of the PowerWatch 2.  I want to see such technology succeed for wearables.  I want to kiss my charger goodbye and not have to worry about it again.

Has the PowerWatch 2 succeeded at this technology?  Well, that remains to be seen since I’ve only had the watch for a few days but so far I haven’t had to charge the watch, the old fashioned way anyway.

Since it’s December in Illinois, I’m not seeing a whole lot of energy being utilized from solar power (when I am outdoors I’m wearing long sleeves) but instead mostly from body heat and the data in the app seems to be reflecting this accurately.

Matrix promises that GPS can be used for 30 minutes a day with heat and solar power being enough to continue powering the watch.  If you exceed 30 minutes, you might have to plop it on the included charger.  I haven’t used the GPS for longer than 30 minutes to see how it handles this.  I’ll let you know in future updates.

There’s only a single watch face with no other options at the moment.  The watch face indicates whether Bluetooth is connected, if notifications have been received, a battery icon, the date, the time, daily steps and active calories burned.

There’s also a red ring that indicates whether body heat transfer is being utilized.  If I take the watch off the red ring disappears.

The watch utilizes a transflective display which means it will reflect back light.  In bright and sunny conditions the screen will be very readable but in darker conditions the screen will appear more dim.  This is the same type of technology that Garmin and other GPS watches use due to the low energy consumption of transflective displays and the great readability outdoors.

There are four buttons on the watch, two on each side.  The top left button shows notifications and acts as the up button when going through menus.  The bottom left button goes through the daily stats including: steps, calories, heart rate, sleep data, and settings for do not disturb and airplane mode, though those last two haven’t been implemented yet.

That’s the reoccurring story of the PowerWatch 2 in December 2019.  There are several features that haven’t been unleashed yet or fully supported.  Notifications do not show the entire text messages and there’s no way to erase a notification.  It will store the last 6 notifications on the watch and automatically delete the older ones.

A vibrations is felt when a notification is received.  There are no sounds from the watch since there’s no speaker. 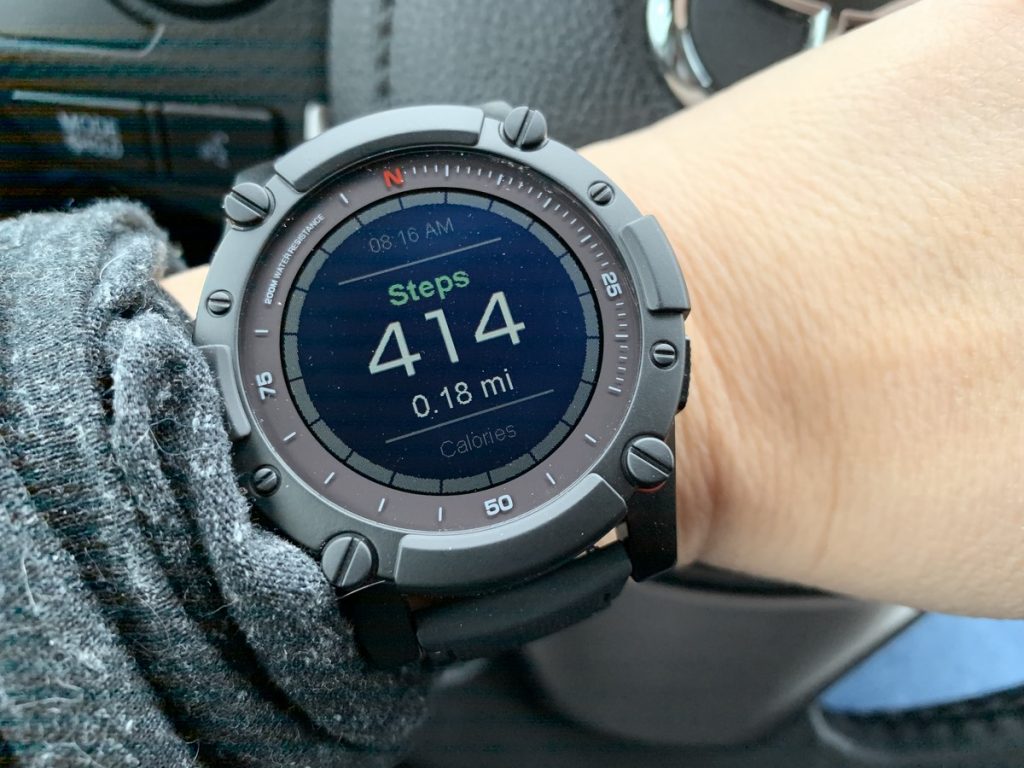 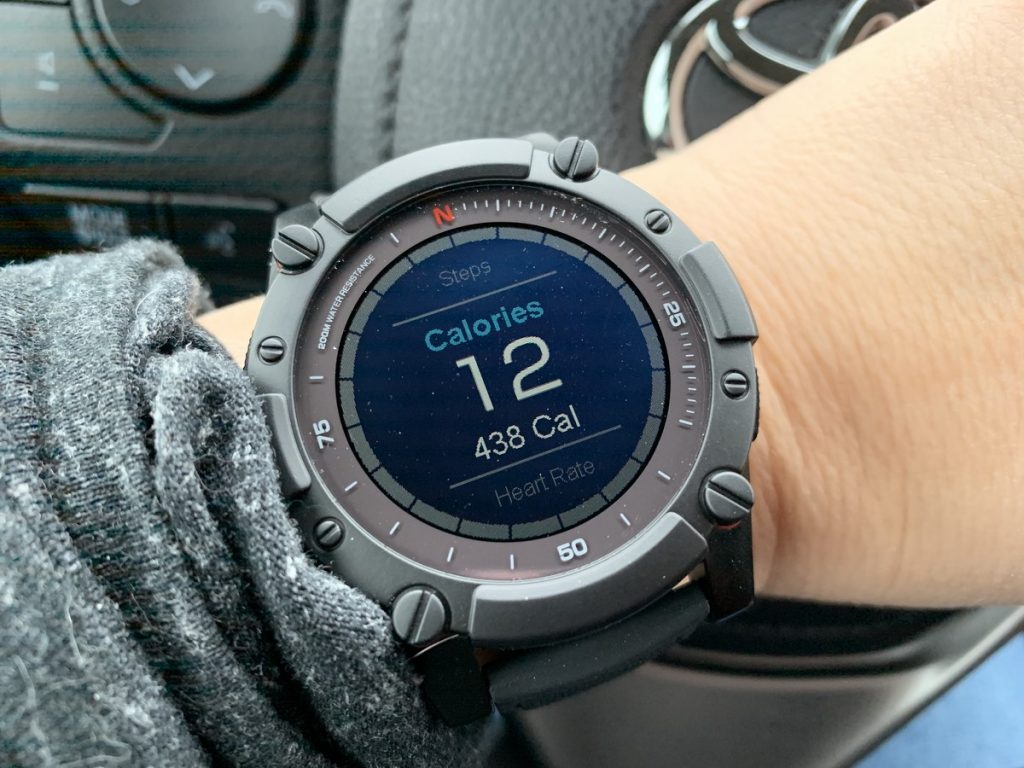 The top right button displays the supported activities including, outdoor run, outdoor walk, outdoor cycle, indoor run, and indoor walk.  The bottom right button acts as the home button and if when held in for a few seconds will activate the backlighting.

Alarms, timers, weather, music controls and other common features found on most smartwatches are not on the watch although alarms are supposed to be coming in a future update, as is better control of notifications.

More sports activities are also supposed to be added over time.

I’ve tested out the built-in GPS twice and both times it connected in less than 3 minutes.  The second time connected faster than the first.  The GPS results look decent, although I haven’t really put it through challenging conditions.  It kept up with the Apple Watch Series 5 in a GPS test.  Actually, I think it followed me a little better.

You can view your route in the app after syncing over the activity.  A map is displayed with a nice feature kind of like an instant replay showing your movement.

Data displayed in the app is quite basic when compared to a Garmin.  It shows duration, distance, active calories, and average pace.  A graph of your heart rate is also displayed and that’s pretty much it.  There’s no elevation data, cadence, etc, but most people generally only care about distance, calories they’ve burned and to see a map of their route for outdoor activities.  It works for me.

Active calories were very similar between the Apple Watch and the PowerWatch 2 but this was the first comparison between the two.

The heart rate sensor is small in comparison to what is found on Garmin, Polar, Fitbit, or really any of the major brands.  It has been accurate for resting heart rate but erratic during workouts.  You can see the erratic behavior in the first GPS test above.  It lost my heart rate for a while and usually read my heart rate higher than the Apple Watch.

Sleep tracking is also supported and sometimes it works quite well but it can mistake times when I’m not wearing the watch as me sleeping.  Hopefully a software update can fix this because otherwise sleep tracking has been decent.

The PowerWatch 2 is an expensive watch.  The base model’s full retail price is $499 which is on the high side considering the competition in that price range.  You can get a Garmin Fenix 5 with far more features for the same price but of course you’re not getting the thermoelectric and solar technology and that’s really what this watch is all about.

It’s the technology behind the PowerWatch that I’m supporting.

I want to see the PowerWatch 2 succeed.  The firmware is currently more in the beta stage at this point but I’m okay with that for now.  Someone paying $500 probably wouldn’t be so patient but as a backer I’m willing to be more patient.

I’m going to hold off doing a full review of the PowerWatch 2 for a few months to see what the developers can do with it.  So far, it’s very promising.  There’s bugs to work out and features to unleash but there is a lot of potential.

I’m rooting for the PowerWatch to succeed.  You can check the current price and availability on Amazon here.