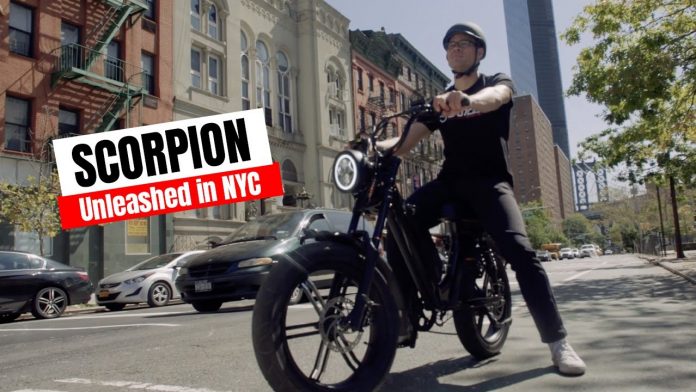 Moped style electric bicycles are grabbing a lot of attention from e-bike enthusiasts and I’m sure soon states and local municipalities that will have to figure out what category to place them in.  Are they e-bikes safe for bike paths or are they mopeds relegated to the side of the road with the other roadkill and subject to all the fees states like to charge for registered vehicles?

Right now, it’s all a bit up in the air as moped style e-bikes and other electric bikes with more powerful motors (750 watts or more) are coming into the mix.  Different states have different laws, some more strict than others.

Most people want to abide by the law but most of us aren’t sure what the law is concerning electric bikes or mopeds or a combination of the two.  We’re new to all this.

We do know that some cities have cracked down on even low wattage e-bikes, seeing them as dangers to pedestrians.

The typical electric bike with a throttle can achieve 20 mph. A rider might be able to get to 22 or 23 mph when pedaling along with the throttle on the highest level of pedal assist but most of us don’t do that for one simple reason.

Riding over 20 mph on a small folding electric bike feels like you’re riding 80 mph on a runaway caboose.  Few riders ride at top speed for this reason and also because they don’t want to be a danger to others around them.

And now that we have bikes that can go 35 mph using throttle, we’ve got a whole new dilemma to deal with.

Typically, e-bikes that can achieve such high speeds can be programmed as class 2 e-bikes to comply with most state and local laws regarding e-bikes.  A class 2 e-bike is one that has a throttle that can reach up to 20 mph and stops delivering pedal assistance above that speed.  A class 1 e-bike has only pedal assist and no throttle and goes less than 20 mph.  Class 3 e-bikes can achieve speeds up to 28 mph with pedal assist.  Once 28 mph is reached, the motor stops assisting.

So where does that put e-bikes that can go over 28 mph?  Uhm, well, in many states it puts them into the moped class.  This means registration is required, licensing, insurance possibly and all that jazz.

It might also mean being tossed to the wolves of city traffic instead of legally being able to ride in bike lanes.

I’ve been thinking alot about this topic myself because I’ll be getting the Juiced HyperScorpion in or near March of 2020.

The HyperScopion is a moped style ebike equipped with a 1000 watt motor that can go over 30 mph.  I originally selected the 750 watt Scorpion model that caps out at 28 mph but its 750 watts motor would still be categorized as a moped in Illinois, so I decided that I might as well get the one that will ship with turn signals, a license plate holder and other accessories that will be needed for a street legal bike.

Plus, the HyperScorpion looks like it’s going to be a blast to ride!!

However, I really want to be able to ride it on my city’s bike path where it’s much safer and more scenic to take a bike.  I can adjust the top speed to be that of a class 2 e-bike and I sure don’t plan to ride it like a fool mowing down people and their pets as I go.

The National Park District recently decided to allow electric bikes in their parks, as long as the top speed is cut off at 28 mph.  That was great news to e-bike riders.

But the laws and regulations are much more murky in other places.  Technically, even my 350-watt Ness Icon folding e-bike isn’t allowed on my city’s bike paths but nobody seems to care.  It’s a cute little bike that doesn’t look very intimidating. Most people aren’t even aware it’s electric.  That’s a good thing for me.

That won’t be the case when I ride up like a motorcycle mama on my HyperScorpion with it’s fat tires, large motorcycle style headlamp, and moped frame.

So where will I be able to ride it?  It will be legal on residential streets and city roads but unfortunately my city doesn’t have the safest roads for bikes of any nature.

That leads to the main reason why I wanted the higher wattage bike with the higher top speed.  I want to have the ability to get away from drivers that aren’t paying attention to bikes.

There’s one particular stretch of road that I regularly take that is narrow and it’s the only time that I use level 5 pedal assist on my current electric bike to get up to 20 mph but 20 mph isn’t enough in those situations.  I’d feel a lot safer riding down the middle of the lane on a moped at 35 mph and slow the traffic down behind me temporarily until I can get to a quieter street.

That’s why I want a higher speed bike, not so I can ride it at full speed on a bike path or in a park but so I can feel a little safer on the road.

Monday Motors recently announced their moped style e-bike, the Gateway, just a couple of weeks ago.  It’s similar to the Scorpion but the specs differ.  The RadRunner from Rad Power Bikes is probably the most popular moped style e-bike but its’ top speed is 20 mph so it’s not pushing the envelope so much.  However, it too would probably turn some heads on the bike path and not in a favorable way.

There’s those purest snobs and their non-electric bikes that think we’re cheating.  Okay, maybe we are a little but we’re still getting exercise and making cycling more accessible to more people.  In other words, more of us are going to be demanding better bike paths and bike lanes in our cities.  That’s a good thing.

Baby Boomers love them.  Us Gen-Xer’s that are also getting long in the tooth love them.  They represent freedom and they also let us be a kid again. They also allow us to get outdoors more, drive less, and appreciate nature.

But I can just picture the dirty looks now when I ride my HyperScorpion on the bike path.

The thing is, if ridden responsibly e-bikes are no more dangerous on a bike path than any other bicycle.  I get passed by non-electric bikes all the time.

So, where should moped style e-bikes fit in?  What should the laws be?  What’s fair?  What’s safe?  That’s all up for debate.

Until that’s settled.  I guess I’ll have to hope nobody notices my cool looking HyperScopion on the trail.  Yeah, like that’s gonna happen!