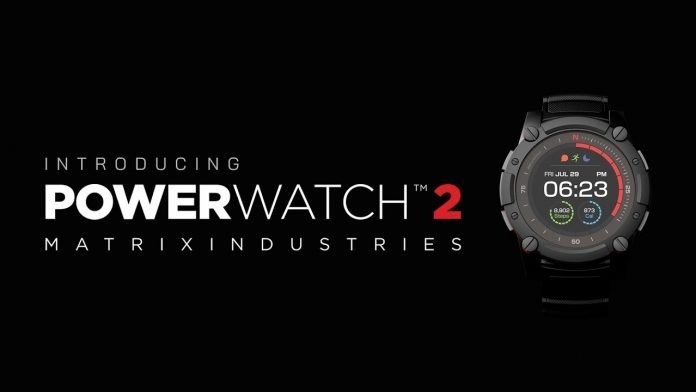 Last year Matrix Industries came out with a unique smartwatch, the PowerWatch, that used body heat to charge it. That meant, never having to use an electric charger. But it also meant that functionality was limited because smartwatches can be power hungry devices and body heat just wasn’t enough.

So Matrix developed the PowerWatch 2 which uses both body heat and solar energy to provide enough juice to power a built-in GPS, heart rate sensor, notifications, and a color LCD screen. Now we just have to see how well it all works.

Back in January of this year (2019) I became a backer on Indiegogo for the PowerWatch 2 and it’s been interesting following the progress of the watch as features were tweaked and added and bugs hopefully worked out. As a tech geek and a watch collector, the PowerWatch 2 was hard to resist and I’m hoping the technology pans out.

Backers and those who have pre-ordered the PowerWatch 2 should be receiving their watch by the end of October – hopefully sooner. And I would expect it to be available through major retailers in September/October to be ready for the holiday shopping season.

My experience with the original PowerWatch was mixed. Some of the firmware updates improved the watch and some set it back. The mobile app left a lot to be desired and the features on the watch were limited to basically being a step tracker, basic sleep tracker, basic running watch, and well, that was about it.

It did live up to its claim of using body heat to charge it however. It only conked out on me when I had let it sit for a few months without wearing it.

Wearing it again didn’t charge it enough to get it to power on. Holding it near a hot lightbulb didn’t work. Holding it over a candle flame didn’t work. I finally had to contact Matrix and they sent me a charging plate which immediately turned the watch back on.

It’s not a charger in the traditional sense and I’m not even sure how it works but it did the trick. The PowerWatch 2 will ship with a charging plate, in case you need to “jump start” the watch. But I would assume leaving it out where sunlight could recharge it should prevent draining the battery in excess when it isn’t worn on the wrist but we’ll see.

Below is a video from Matrix introducing the PowerWatch 2:

As a backer, I did make the suggestion, more than once, to design a more unisex watch.  While the original PowerWatch isn’t exactly dainty, I don’t feel like I’m wearing a man’s watch on my wrist – just a big watch that only  cool nerds like me would wear.

The PowerWatch 2 is very masculine in design which is great if you’re a guy!  Hopefully, next time around they’ll remember the ladies because I see a lot of women at my gym, on the running trails and hiking trails in my neck of the woods.  We don’t like charging our watches all the time either!

Still, I like the look of PowerWatch 2 and if the GPS and heart rate sensor is good, I plan to wear it hiking and during my outdoor adventures.

While the original PowerWatch only supported running as an activity, the PowerWatch 2 will support running, cycling, and swimming right off the bat with other activities supported later.

It will feature a sapphire glass screen and a water resistant rating of 200 meters, so it should be a fairly durable watch and one that is ready for the outdoors.

I’m a bit skeptical that the heart rate sensor will be as accurate as I demand. It’s pretty small compared to what is found on Garmin, Fitbit, Samsung, Apple, and other smartwatches and fitness trackers. Hopefully, it surprises me.

The last I heard, GPS usage will be around 5-7 hours, possibly but Matrix really hasn’t revealed any such specific details just yet.

Developers will also be able to develop low energy apps/widgets for the PowerWatch 2. There’s no word on available watch faces or how advanced notifications will be.

Anyway, I hope to have the PowerWatch 2 in the coming weeks and I’ll be sure to share my experiences with it and all the details.