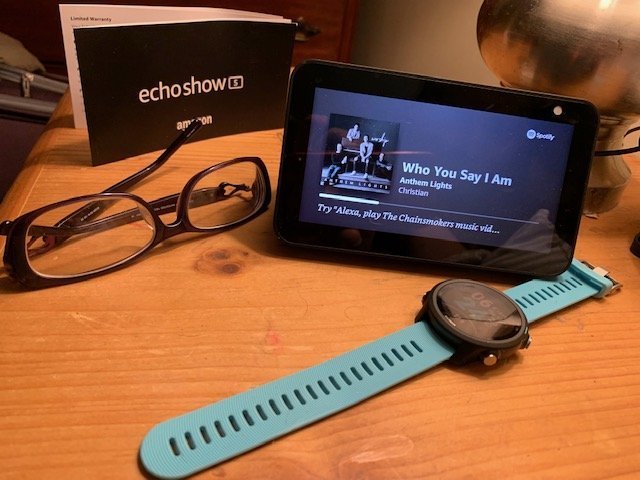 Admittedly, I’m new to smart speakers, smarthome devices, and Amazon’s Alexa. Sure I read the funny stories of how a bug with some Echo devices had Alexa unexpectedly speaking in the middle of the night and nearly scaring some people to death. I’m pretty sure that bug has been fixed. And of course, I’m aware of privacy issues but the Echo Show 5 went old school to squash at least one of those major privacy concerns. But what does the Echo Show 5 do? I really didn’t know until I got it. It turns out, it does a lot.

As a smart alarm clock it uses voice commands primarily to carry out whatever tasks you would like it to do. The biggest learning curve is knowing what to ask or how to ask it, especially when you don’t know what the device is even capable of.

For example, I can say “Alexa, what is the weather forecast?” And the device will speak in Alexa’s sexy voice what the forecast is and also show the forecast on the screen.

I have to admit, I still feel funny talking into the device. I’ve never used Siri on my iPhone and only used Google Assistant a few times on my Android smartphones. I just feel goofy talking to an electronic device but I’m getting more used to it.

The Echo Show 5 does have an on-screen menu for selecting music, video, alarms, smart home commands, communicate, and routines. This menu slides out when you swipe the screen from the right side to the left. In my experience the screen is responsive.

Music sounds quite good on the device. Actually, I am very surprised and pleased at how good the sound quality is. There’s quite a bit of bass for such a small speaker. There’s also an equalizer in the mobile app for adjusting sound preferences.

TV shows that I’ve watched on the Echo Show 5 sound terrific. I think it’s worth buying just as a smart speaker even if you don’t plan on using it for anything else.

It also supports Spotify and several other streaming music services. Once you have asked Alexa to play certain genres of music, the device will remember it and you can then use the slide out menu and select music and a list of the genres of types of music you’ve asked her to play appear.

The same is true for videos. To really get the best experience with video, you’ll need to be an Amazon Prime member. With that membership you get Amazon Video (and Amazon Music).

The screen quality certainly meets my expectations. The color and sharpness is pleasant. However, if you’re buying the Echo Show 5 primarily for watching videos, you might want to upgrade to the larger Echo Show 2nd Generation.

I wish the screen on the Echo Show 5 was a little larger for watching videos because I do enjoy watching shows at night to help me fall asleep such as: Ancient Aliens, documentaries about the Pyramids, the Shroud of Turin, and the Brady Bunch. As you can imagine I have some very interesting dreams falling asleep to that lineup.

I think the 10-inch screen of the Echo Show 2nd Generation would be ideal for the kitchen when following recipes. It might be overkill on the nightstand but maybe not.

Still, I do watch videos on the smaller screen Echo Show 5 and still get immersed in the show regardless of that smaller screen and the sound quality just adds to the viewing pleasure.

My house isn’t equipped with smarthome devices. I have to turn on lamps using my hand and the switch. I have to get up and see who’s at the door when I hear a knock. So, I don’t have experiences to share regarding connecting with other smart devices but from what I’ve read, the Echo Show 5 handles those tasks well.

The Echo Show 5 is also a device to help you connect with friends and family members that also have compatible Echo devices. If your family members are far away and you don’t get to see them often, this can be a great feature to see your kid at college or your grandchildren 5 states away.

And the affordable price of the Echo Show 5 makes it easier to buy more than one so you can buy one for yourself and one for a family member. Actually, right now as I’m typing this on July 15, 2019, Amazon has a discount when you buy two at the same time. I don’t know how long that deal will last.

And of course, the Echo Show 5 can be used like Siri or Google Assistant on your phone to answer questions. You can ask how to prepare a recipe or what feathers are made of. Doing homework would have been a lot easier back in the day if I had had Alexa.

Food Network is also supported and you can watch videos of how to prepare certain recipes plus see a list of an ingredients you’ll need. I really think the larger screen of the larger Echo Show would be more practical for those wanting to follow recipes.

There’s also “skills” that you can add to the device. These are basically apps. So far I’ve only added MyRadar which is great for getting the forecast with a display of an animated weather radar screen.

Oh, and about those privacy concerns. The Echo Show 5 has a physical shutter that you can slide across the camera lens so there’s no more worries about Big Brother or hackers recording video of your home.

You can also turn of the mic and camera with a physical button. I guess there’s no way of really knowing if the mic is turned off if hackers were to somehow infiltrate Echo devices.

So, if you’re planning to invite your mob family over and discuss “family business” you might not want to have Alexa in the room, or your smartphone for that matter. :)

Some Room For Improvement

There are some annoying things about the Echo Show 5 too. My biggest gripe is that when I want to watch Ancient Aliens I’m not able to see a list of the episodes. It just plays them in order. The same goes for music.

I would imagine this is something that could be fixed in a software upgrade. Amazon, if you’re listening, this should be on your “To Do List”.

There also isn’t a YouTube or Netflix “app” on the device but you can play YouTube videos through the Firefox browser. Yes, you can view websites on the Echo Show 5.

Overall, I’m impressed with the Echo Show 5. Again, I think it’s worth buying just as a very good smart speaker. The sound quality blew me away and you can add other Bluetooth speakers or go old school and use the port in the back for hooking up a speaker with a cable.

But there’s so many other things the device is capable of. You can keep up-to-date with the news, listen to podcasts, and send text messages or make phone calls when paired to a smartphone.

Oh, and as a smart alarm clock the alarms are also smart. The screen goes dark in a dark room. It is equipped with an ambient light sensor to automatically adjust screen brightness. You can also manually change the brightness level.

In the dark, you’ll just see a dim display of the time and outdoor temperature but 15 minutes before your alarm sounds the screen starts getting brighter. The volume of the alarm can also be set to get louder so you don’t have to wake up to a jarring sound.

You can also personalize the background of the home screen. I have a photo of my smiling grandson to wake up to every morning.

For the money, the Echo Show 5 packs in quite a bit – more than what I would expect.

Again, if you’re most interested in viewing videos or planning to set up the device in your kitchen to follow recipes, I’d recommend the larger Echo Show 2nd Generation but overall I’m very happy with the Echo Show 5. It’s a cool little gadget that I didn’t even know I needed as a nightstand sidekick.