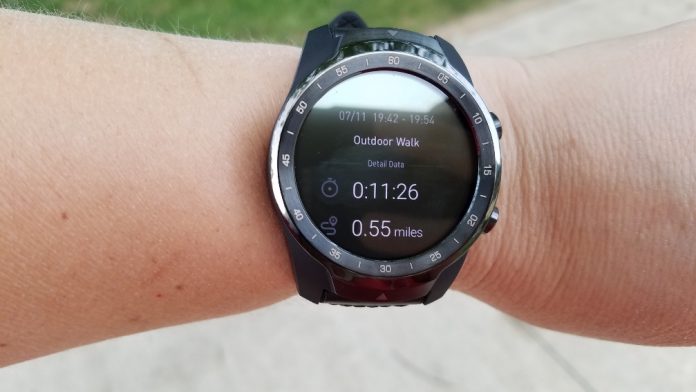 Mobvoi unveiled the new Ticwatch Pro LTE version today on their website. This is the first LTE smartwatch Mobvoi has offered and works with Verizon. It still features that same layered screen technology that the original Ticwatch Pro is known for and has added several other features that make it look like a worthy upgrade.

The original Ticwatch Pro tested out very well for me. It is good at fitness and at being a WearOS smartwatch. The build quality and style makes it look at feel like a high quality watch.

My only major complaints of the Ticwatch Pro was the size and weight. The original Ticwatch Pro was a hefty 58.8 grams and the new version is now 47.4 grams. That’s a significant difference that will be felt on the wrist.

It’s also now thinner at 12.6 mm down from 14.6 mm which is terrific! Being both thinner and lighter makes it more appealing to a wider audience.

It still has a masculine appearance but I think a little less so. It’s still an attractive watch with a bit more sporty look, perhaps due to the new silicone band. The 22 mm band is replaceable like the original Ticwatch Pro.

The heart rate sensor has also been overhauled with more data and greater accuracy according to Mobvoi. It still has built-in GPS. Both the heart rate sensor and GPS tested out very well for me on the original Ticwatch Pro so I’m expecting good results.

LTE service from Verizon won’t begin until August but the rest of the features of the watch will work using Bluetooth and/or Wifi. So, if you don’t plan to use the LTE feature, you can still use the watch connected with your phone to take advantage of the WearOS apps.

There will be more details on the watch later but you can check it out now on Mobvoi or Amazon. Special pricing and deals are available for early buyers on Mobvoi for a limited time and they’re might just be a nice discount on Amazon during next week’s Prime Day sales which are July 15th and 16th this year.