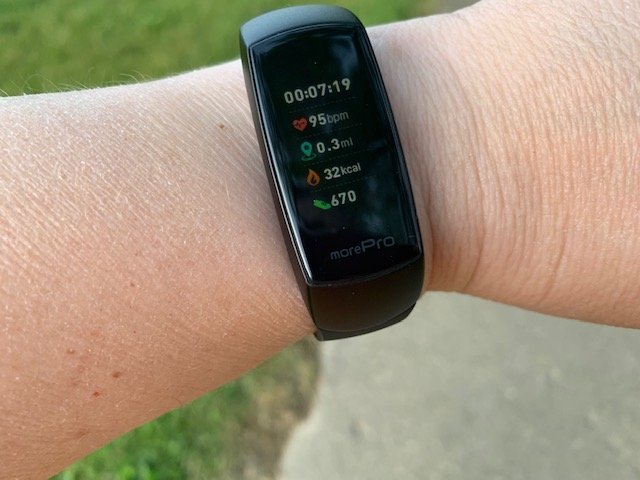 While Fitbit has been promising the ability to detect sleep apnea in the near future, a few fitness trackers have gone ahead and unleashed the technology. The MorePro HRV fitness tracker features a blood oxygen sensor and sleep apnea detection. I have had surprising results with the SPO2 sensor and much more on that in a bit.

The MorePro HRV tracker (available on Amazon) is also a decent fitness tracker that will count your steps, measure your heart rate 24/7, calculate active calories burned, estimate distance walked or run, supports smartphone notifications, and supports running as an activity. Of course, as its’ name suggests, it does measure heart rate variability (HRV). Basically, a higher HRV number indicates a healthier heart, though that’s simplifying it a bit. HRV is also useful in detecting stress and fatigue.

It features a color OLED screen with a touch sensitive area on the screen in which users can navigate through the various screens, such as steps, distance, heart rate, SPO2, etc. It’s very simple to use and has that traditional fitness tracker bracelet look that sits well on the wrist.

This is a tracker that I have been wearing on and off for the past three months so I’ve had quite a bit of experience with it. Overall I’ve been happy with it.

In my tests, the step tracking accuracy is between 94-96% accurate. I did several 100-count step tests to determine this percentage range. It’s always difficult to know what tracker truly produces the best accuracy in terms of step tracking but it did well against other much more pricey and well-known devices from Garmin, Apple, and Fitbit.

And unlike a lot of budget fitness trackers, it does count all your steps instead of waiting to begin counting until you’ve walked more than 25-40 steps or so. Many of the cheaper trackers I’ve reviewed don’t count every step which I find annoying. They do this as a way to prevent counting random arm movements as steps but I haven’t noticed the MorePro HRV counting steps when I’m sitting and working at a computer or tossing and turning in bed.

The MorePro HRV is on par with other smartwatches and activity trackers t for resting heart rate. It has been very accurate in several tests.

During activities, I’ve noticed that the heart rate is typically 4-9 beats per minute lower than other trackers I’ve compared it to. It really begins to struggle when I’m running, though to be fair I’ve experienced this with much more expensive trackers. Still, I wouldn’t buy the MorePro HRV for a running watch.

However, if you’re looking for a daily fitness tracker to keep track of your heart rate throughout the day and while sleeping, it’s been accurate in my tests.

I removed the Garmin around 6 in the morning so it obviously wasn’t able to detect when I fell back to sleep so that explains much of the difference in the total sleep time but there is quite a bit of difference between the two in terms of when I fell asleep, woke up, and how long I was in deep and light sleep stages.

So I’m going to assign a grade of C for sleep tracking since it did okay but then again it’s hard to say.

It’s difficult to determine the accuracy of the SPO2 sensor because it measures throughout the night automatically. Obviously, when I’m asleep I can’t compare its’ results to a medically approved blood oxygen sensor but in my tests during the day in which I performed manual readings, it consistently gave readings that were the same or very close to a finger blood oxygen reader.

It doesn’t do automatic readings throughout the day because you need to be still in order to get accurate results. You can choose whether to enable blood oxygen night monitoring or not. Automatic heart rate detection can also be turned on or off.

Night readings for blood oxygen are from midnight to 7 am. You’ll notice a red glow beneath the tracker on your wrist when the SPO2 sensor is on. It’s not distracting by any means but you can see that it is on.

I compared the blood oxygen readings against the Garmin Forerunner 245 Music which is also equipped with a SPO2 sensor and the results from the MorePro have been more what I would expect while the Garmin has been more erratic.

Unlike the Garmin, through the MorePro mobile app, you will be able to see if the tracker detected periods of sleep apnea during the night. Garmin doesn’t do this but you can still see blood oxygen trends where dips in blood oxygen occurred.

I have not been tested clinically for sleep apnea and never thought that I needed to be but the MorePro HRV detected a few periods of sleep apnea. When I was sick with bronchitis it detected more episodes of apnea during the night and a lower average blood oxygen level.

I would love to be able to compare both the MorePro HRV and the Garmin Forerunner 245 Music against a clinical sleep study but honestly I trust the results of the MorePro over the Garmin. It has been more accurate in tests against an FDA approved blood oxygen sensor during the day. If it’s accurate during the day, I would assume it’s probably doing a decent job at night.

Still, it’s hard for me to give a grade on the SPO2 sensor because I don’t know if the night readings are accurate. I don’t want to mislead people.

So, I’m going to hold off giving a grade for blood oxygen accuracy for now, especially in terms of detecting sleep apnea.

The MorePro mobile app provides an incredible amount of health data. In comparison to Fitbit, you’ll see much more detail about your heart rate especially. The MorePro also has HRV (heart rate variability) and SP02 (blood oxygen) data that most trackers do not provide.

The data is almost overwhelming because, if you’re like me, you may not know how to interpret all of it. In addition to SPO2 you’ll see your respiratory rate, hypoxia time (if any), cardiac load, sleep activity amplitude, heart health index including Lorentz scatter diagrams for heart rate change, sudden change of heart rate, neural state, and heart rhythm change. Whew!

What is exciting to me about all this information is that we’re beginning to see the transition of fitness trackers merely being for tracking steps, heart rate, and sleep to more medical purposes.

All of the major players like Apple, Garmin, Samsung, and Fitbit are also moving in this direction. The Apple Watch Series 4 can detect atrial fibrillation and many of Fitbit’s newer trackers are equipped with SPO2 sensors for detecting sleep apnea but have yet been enabled. Fitbit is currently going through lengthy studies and beta tests before enabling sleep apnea detection which I think is wise.

But back to the mobile app…it’s very good. It may be a bit overwhelming but it’s been reliable in terms of syncing data.

I have the MorePro HRV paired with the iPhone Xr and the connectivity has been reliable. Notifications are received and syncing hasn’t been an issue. The Bluetooth connection hasn’t dropped unexpectedly on my phone and when I go out of range and then back into range it has reliably reconnected. No problems with Bluetooth connectivity.

After wearing the tracker for a number of weeks, I haven’t noticed any scuffs or scratches. It still looks brand new. It’s comfortable to wear and has a slim profile that isn’t conspicuous on the wrist. The band is adjustable for smaller and larger wrists. Only people with very small or very large wrist may run into a problem.

The color screen turns on with a twist of the wrist, such as when you turn your wrist towards your face to see the tracker. This can be turned off or you can specify what hours you want this turned on. For instance, I have mine set for tilt to wake from 5 am to 11:30 PM. That way the screen isn’t turning on everytime I move my arm in bed which can be really annoying.

The screen is difficult to read in bright sunlight. You’ll have to shade the screen to read it. This is typical of such displays. It would be great if the screen became brighter in brighter conditions automatically but it doesn’t have this feature.

Overall, for the price it’s a nice looking tracker that doesn’t look or feel cheap.

If you have automatic heart rate monitoring (24/7) and blood oxygen detection turned on the battery will last 2-3 days between charges. It would last longer if one or more of these were turned off but those are really the best features of the tracker. I’d prefer 3-4 days of battery life but 2-3 days isn’t bad considering the sensors that it uses.

In my experience, the the MorePro HRV is a good alternative to a similarly designed Fitbit or Garmin if you are most interested in tracking your steps, heart rate throughout the day, and receiving notifications.

If you’re looking for a tracker for the gym, this wouldn’t be the best choice. I’d recommend a more robust trackers for such needs like the Fitbit Versa, Garmin Forerunner 245 / 245 Music, Garmin Vivoactive 3, Samsung Galaxy Active, or the ever popular Apple Watch Series 4. (All on Amazon)

If you’re wanting to use the MorePro HRV to monitor blood oxygen, I wouldn’t do so for medical purposes since it isn’t FDA approved but I think it’s been good at detecting trends or changes. If you think you may have sleep apnea consult your physician.

Only clinical studies and/or tests can be trusted to detect sleep apnea or other medical conditions. However, I am excited to see technology on fitness trackers begin to tackle medical issues. In the next few years they will be used for that purpose more and more as technologies improve.

View the MorePro HRV on Amazon