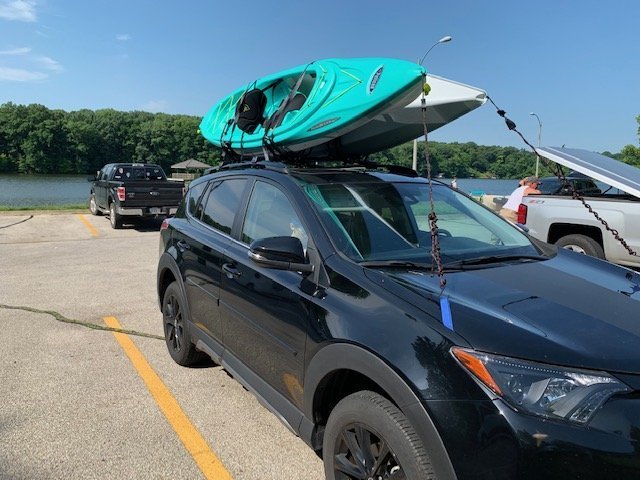 It only took one time out on the water on a kayak to fall in love with it. Many people find themselves in this very situation. There’s something about being so close to the water, feeling the sun on your skin, paddling like Lewis & Clark on your own little adventures in uncharted, or maybe not so uncharted, areas. It’s relaxing but a workout without feeling like one. My kind of workout!

So you search for and seek out the kayak for you. You did your homework and found the one to take home and then you realize, “How am I going to get this home?” So, you call a friend or relative with a pickup truck or a trailer and now you have your kayak home. Sitting there on dry land. Then you realize, though it probably crossed your mind before, that you need some way to transport your kayak to the lake, river, or some body of water to float around on but you know it’s not going to fit into the trunk of your car.

So, you begin Googling and possibly end up here or on YouTube and become a bit overwhelmed at the thought of purchasing the right accessories and strapping the kayak down correctly so it doesn’t blow off causing a 30-car pileup.

This is exactly how my journey went. I didn’t have many clues as to what I needed to transport the two kayaks I had purchased. There was a lot to learn.

So that was about $180 for two unimpressive bars that probably only cost $20 to manufacture. Ugh!

I would later regret getting those factory Toyota crossbars because it would have been better to have chosen wider ones since the RAV4 isn’t a wide vehicle and the section of the cross bars I can actually attach anything to is even more narrow.

The factory crossbars work but I wish I had purchased universal, adjustable width crossbars like these on Amazon. Not only would they have accommodated the width of the j bars and my two kayaks better but I also would have saved about $140. Well, you live and learn and pay the price.

Luckily, I did find the j bars for a reasonable price. There is a wide variety of different styles and price points but I went with the Tengchang mounted rack for kayaks and canoes on Amazon, of course. The price was great considering I got two sets which I needed for the two kayaks I would be carrying.

It was a little intimidating after opening the box of those j bars and seeing all those pieces and bolts but assembly wasn’t difficult once I put my thinking cap on. The instructions plus some common sense got the job done.

One thing I worried about was how easy they would be to attach and remove from the crossbars. Other more pricey options are easier to install and remove, such as the Yakima Jaylow Kayak Carrier (also on Amazon). As someone who has now used to cheaper system, if your budget allows it, I would highly recommend going with Yakima or a similar system.

The cheap j-brackets shifted on me and a couple of the bolts were already showing signs of corrosion after being on my roof for a couple months. Like most things, you get what you pay for.

Whatever you go with make sure that they are compatible with your vehicle. Most SUVs have side rails which makes attaching crossbars easy but there are options for vehicles without siderails. Shop around and learn as much as you can.

I learned the most important gear for transporting kayaks are the straps and whether they are used properly.

The j bars/brackets are mostly just for propping the kayaks up in a cradled position. It’s the straps that keep the kayak on the roof so I would highly recommend purchasing good quality straps that are easy to use and strong.

Cam straps are recommended over ratchet straps because it’s easy to overtighten a ratchet strap which can damage your kayak. This is less likely with a cam strap. A good set that I recommend are the Vamo cam straps. They are less likely to scratch your kayak since they are made of soft nylon.

I was very thankful for the soft cushioning nylon casing around the buckles because the straps can and will swing against car windows and doors, as you are securing your kayak. I know they saved my car from scratches. They’re very much worth it.

Tip: If possible, wrap the straps around the permanent roof rails and not the crossbars. Crossbars are not nearly as strong as the roof rails.

Bow and stern tie downs are also very important. While the straps which wrap around the kayak hold them snug to rack, the tie down straps add extra insurance that the kayaks will stay in place from the tremendous wind forces they’ll be experiencing.

The tie down straps, especially the bow (the front) strap help reduce the force of the wind from lifting the kayaks. This lifting puts a lot of pressure on your main straps which you want to reduce.

You can use rope or really any type of strong strap for your tie down straps but I decided to go with this ratchet set since I wouldn’t need to tie knots in them. They worked great!

Yes, these are ratchet straps but I make sure I don’t overtighten them. You can use ratchet straps for your main straps, as many people do, but I learned from experienced kayakers that cam straps are better for that particular job.

One option are hood tie down loops that can be placed under the hood and trunk of your car. They are simply straps that are attached to rubber tubes in which the tubes are closed beneath the hood or trunk and the loops stick out.

There are also tie down loops with hooks. If your car has holes to attach hooks to they’re a good option. Just pop up your car’s hood and see if there’s anything to attach to.

Tip: I highly recommend using bow (front of kayak) and stern (back of kayak) tie down straps. I can’t stress this enough. They really do protect your kayak and rack from damage or excessive stress. I know from experience! They require very little time or expertise to use and are absolutely worth it. I thought I wouldn’t need them for a short trip in which I was going under 50 mph but I was wrong. Luckily, I was using the bow strap as one of the kayaks shifted as I was driving but it wouldn’t haven’t shifted if I had also used the stern strap. Lesson learned. Use bow and stern straps for every single trip.

Other Things to Consider

Something else that you may want to invest in is a good step stool or step ladder. I’m only 5’1″ so obviously I need a step ladder to help get the kayak on top of the car, adjust the straps, and whatnot.

I chose the Deluxo step ladder on Amazon since it’s collapsible and tall enough for my needs. Of course, you can find step stools and ladders in many stores.

Since you’ll be needing straps, tie down ropes, etc., make a good plan for storing them. A simple cardboard box will do the trick. I just have one in my car with all of the straps I need so I can find them easier. Just make it habit to put all of those things back in the box when you’re not using them.

Other things to keep in the box are a wrench for tightening your brackets if they were to come loose (they probably will eventually), a towel to protect your car’s finish from wayward swinging strap buckles when you’re strapping your kayak down, towels or rags to protect the car’s finish from rubbing straps or ropes if that becomes an issue, and any extra tools you think you might need.

I’d also recommend going a short distance for your first couple kayaking trips. If you’ve never transported a kayak before it’s better to find out what extra accessories or strapping techniques you might need to use or incorporate when you’re only a few miles from home and not 200 miles away from civilization. I learned this firsthand. I wasn’t 200 miles from civilization but I learned many lessons from those short, low-speed trips that I wouldn’t want to have learned going 75 mph. My kayaks may have took flying lessons into a ditch.

Experience matters. Learn from others so you don’t learn the hard way.

On that note, I’d recommend practicing lifting and strapping the kayaks at home before you embark on your adventures. It may save your marriage, friendship, or happy family.

More marriages have probably been destroyed by road trips, backing up boat trailers, and strapping down kayaks than all other causes combined.

Seriously, you and your partner really want to get the routine down and know how to carry out each step, until it becomes second nature, so you can concentrate on enjoying your kayaking trips instead of possibly killing your significant other in a moment of strap rage. Believe me, the strap rage thing is real! Practice. Practice. Practice.

Transporting kayaks isn’t difficult and the equipment you’ll need isn’t hard to install or find but it definitely helps to learn from others. Once you’re out on the water and enjoying yourself it will be worth it but expect a bit of a learning curve in the beginning as you transport your yak to your favorite locations.