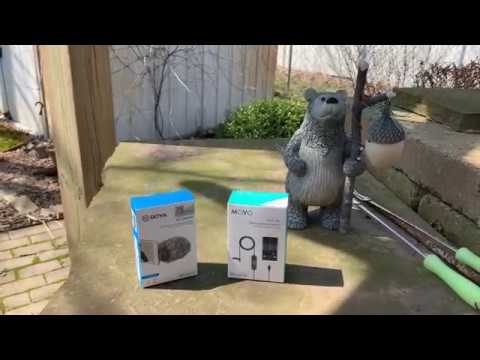 The iPhone XR takes incredible video and that’s the reason why I chose it as a smartphone. I needed a new phone and I also needed a new video camera so it seemed like a no-brainer. The video quality hasn’t disappointed me at all but for outdoor recordings, on windy days, the built-in mics on the XR produces quite a bit of distortion, as would be expected. So I went on a search for a good external mic for the iPhone XR. The mics below also work for any iPhone using a lightning connector.

I came across two on Amazon. Both use lightning connectors so no adaptors are needed. The less expensive options require adapters and I figured that would be just one more item to keep track of when I’m recording outdoors. I just wanted something to plug directly into the phone and begin recording using the camera.

The first one I found was a standard lavalier mic with a cord. It features an omnidirectional clip-on mic, a lightning connector for iOS devices, and a 20′ long cord. It is the MOVO LV1-DI digital lavalier microphone that can be used with iPhones, iPads, and other compatible Apple devices.

As opposed to other lavalier mics I’ve used with a camcorder, this one doesn’t require a battery. Instead it is powered by the phone which is convenient. It comes with a hardshell case to store the mic.

The other external mic I found is the BOYA BY-DM200 digital condenser stereo microphone. This seemed like the ideal solution for my needs, since most recording I do is outdoors when I’m on trails. I didn’t want to have to deal with a cord.

The mic can be pointed in either direction – at me to record my voice or away to record whatever I’m looking at.

It also comes with two windshields, a standard foam shield, and what is called a ‘dead cat” wind shield which is just a fury cover over the mic to greatly reduce wind noise. It is also powered by the phone, so there’s no need for extra batteries.

I definitely found the BOYA much more convenient and practical to use on the trail. When I wasn’t using it, I could easily fit it into a pocket. The corded lavalier is more ideal for tripod usage. For instance, if you plan to make a presentation in front of the camera and will be standing more than a few feet away from your phone than a lavalier makes more sense.

I’m happy to report that both did a good job at that. I think the MOVO lavalier did a little better but I did test the BOYA with the fury windscreen since it was such a windy day. Using the foam windscreen would filter out less background noise

I did the tests on a windy day and there is certainly a noticeable difference between the internal mic on the iPhone XR and both mics. But the proof is in the sound. Take a listen below.

View the BOYA BY-DM200 and the MOVO LV1-DI Lavalier on Amazon.