About 4 years ago I lost about 55 pounds and many people asked how I did it. The major misconception about losing weight is that you have to exercise a lot. While exercise was part of my weight loss, the far more important factor was discovering how many calories by body truly needs and how many calories were in the foods I was eating. Weight loss is all about what you eat.

This article will be discussing a new food scale I came across, the Greater Goods Nourish Digital Kitchen Scale.

The two main tools that I used to keep tabs on how many calories I was burning versus how many I was consuming was MyFitnessPal, a mobile app, and a basic food scale.

I was completely ignorant of how many calories were in the foods that I was regularly eating and I was equally as ignorant as to how many calories my body can consume and lose weight, maintain weight, and/or gain weight. I just wasn’t aware as many people aren’t.

The American diet is a bit supersized to say the least and we’re used to eating larger portions. In fact, I think we feel like we’re being ripped off if we don’t get mega portions at restaurants, even though we probably only need to eat half of what they give us.

Also, we eat a lot of junk food. There’s many days in which I don’t consume a single fruit or vegetable. I’m trying to change that but I’m amazed at how difficult it is to work healthier foods into my diet – mostly because my diet is so full of other things.

Since losing the weight, and gaining back about half of it, I’m trying to focus once again on how many calories I’m consuming.

I have to admit that I’m finding it really difficult to going back to counting calories again. While I enjoyed it as the pounds melted off fairly quickly 4 years ago, now that I have less to lose and the weight doesn’t come off as quickly, it’s hard to stick with it. The reward isn’t the same.

There’s a huge difference between weighing 180 pounds and 125 pounds, especially when you’re only 5′ 2″ tall. It was highly motivating to see my progress.

Now that the progress is less visible but still worthwhile for health reasons, it’s hard. I’m not going to lie. It is hard to be motivated, even though I really would love to weigh less and fit into clothes that I’d prefer to wear.

Luckily, I am a total tech nerd, as you can probably tell by this site, and I came across a new food scale that makes calorie counting a lot easier and maybe nerdier. It also provides other nutritional information beyond just calories which is something that I’ve always kind of ignored.

Now that I’m a little more knowledgeable about food nutrition and my own body’s needs, I do pay more attention to nutritional value.

I don’t just pick low calorie items. Now I’m also focused on what is good for my digestive health – namely I need to ensure that I’m eating enough fiber for my colon. Protein content is also important for feeling full longer. Those sugar crashes will wreck a diet in a hurry.

I should also pay attention to cholesterol since my numbers aren’t that great.

So back to the nifty gadget I came across. It’s called the Greater Goods Nourish Digital Food Scale (available on Amazon) and while I used a food scale before, the major drawback was that it only provided me the weight of the food I was weighing. It didn’t tell me the calories.

To determine calories, I had to enter the weight into MyFitnessPal or a different online tool. So, it was a two or three step process that became cumbersome.

With the Greater Goods scale, all I have to do is look up the food code in the provided booklet and weigh the food. Calorie and nutritional information is then displayed.

The data is displayed in a very familiar format as the labeling you’ll find on packaged food items.

Nutrition Facts Displayed on the Scale:

There are a number of food codes provided but you can also manually program new codes of items not found in the book which is great.

It’s a terrific tool for kids and adults to learn how many calories are in the foods they’re eating and learning portion control.

Portion control is so key to losing or maintaining weight. It is what I have relied on to maintain my current weight. Once you’ve weighed enough food items and know how many calories are in them, you begin to understand what portions you can put on your plate. And then you don’t have to weigh all of your food all of the time.

But for losing weight, I still need a food scale because the margin of error is so small. As a petite woman I can only net about 1200-1350 calories a day and expect to lose weight. Calories in such a small range aren’t easy to estimate by portion control alone.

And yes it is difficult to only consume about 1300 calories a day and that’s where exercise comes in because by working out and burning 200-300 calories a day, I can eat closer to 1500 calories and then net around 1300ish and still lose weight.

1500 calories for me is much more doable than sticking to a 1200 calorie a day diet.

The trickiest part for me is maintaining at a lower weight than I currently am. I can maintain 147-150 pounds fairly easily but to maintain closer to 135 pounds, well, I haven’t mastered that yet.

So, I need to learn what portions I can eat and stay at a healthier weight for me and hopefully this scale will help me do that because it reduces the number of steps to determine calorie content.

The scale is also helpful in determining fiber, carb, protein, cholesterol, and other nutritional information which is important and areas that I shouldn’t overlook.

The scale is available on Amazon and has hundreds of positive reviews. There is a little bit of a learning curve to using it and I’ll be recording a YouTube video showing you how to use it but until then you can check the scale out on Amazon here. 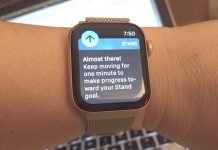