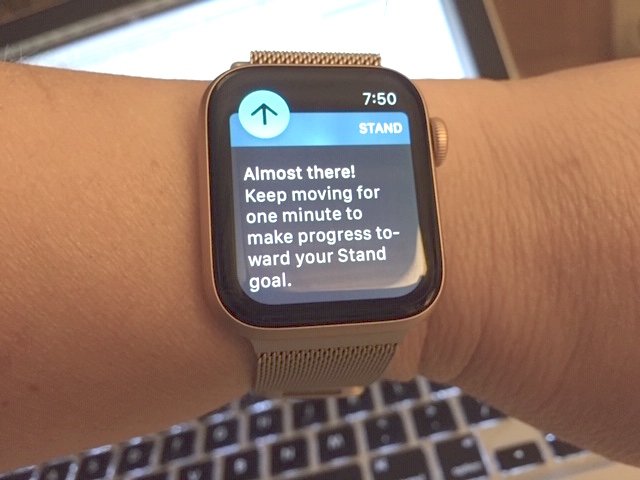 While we’re often told that sitting too much is bad for our health, it turns out, according to a recent study, that standing for long periods of time may double the chances of experiencing a heart disease incident.

On nearly every fitness tracker, there are move reminders, or those that prompt us to stand up for a while but maybe for some of us, we should be reminded to sit once in a while.

One of the most difficult aspects of a job that involves standing all day is physically getting used to it.  Those first couple of weeks can be brutal.  I should know.  I’ve been there.  I’ve come home with painful feet, knees, hips, pelvis, and back.  Standing all day at work is not easy on the body but there are other health-related consequences that most of us, including myself never considered.

While sedentary behavior has been associated with a number of diseases, sitting for prolonged periods of time in an occupational setting in other studies hasn’t been directly correlated with increased cardiovascular disease risk.

There have been a number of studies on sedentary behavior and the health consequences of such but few on occupational related physical activity or inactivity.

According to the study (2017) which included 3,828 men and 3,492 women, heart disease incidence was higher in those workers that had jobs that involved mostly standing.  In fact, those that stood through most of their workday were twice as likely to have an incidence of heart disease.

Some of the possible reasons listed in the study included blood pooling in the lower limbs, increased hydrostatic venous pressure, and enhanced oxidative stress.

It’s not hard to imagine why blood would be pooling in the lower limbs from standing but understanding what hydrostatic venous pressure is and oxidative stress may require some more explanation.

While the study didn’t define these terms or discuss them in detail, hydrostatic venous pressure is basically the blood pressure upon arterial vessels and when we stand this pressure increases in the lower body regions.

Heart rate is typically higher when we’re standing than when we’re sitting.  In order to fight gravity, the heart has to pump harder and faster to pump blood throughout the body.  This increases pressure.

Oxidative stress is basically an imbalance between the production of free radicals and antioxidants.

Okay, well what exactly is a free radical you might ask?  Are they holding picket signs at a court house and growing their hair long?

Not exactly.  Free radicals are simply molecules that contain oxygen that have one or more unpaired electrons that can react with other molecules in the body.  This can lead to cell damage, amongst other changes.

Antioxidants in cells can prevent free radicals from reacting with molecules in a cell.  They essential hold free radicals in check.  We don’t want them getting too rowdy.

So what do you do to combat these health risks if you have a job that involves lots of standing?

The study didn’t offer any suggestions but in my research compression stockings can help lower pressure in the legs which may help.

Also, common sense would suggest that taking more sitting breaks would help but some employers aren’t too keen on seeing their workers sitting but maybe they should actually encourage it.

If you want to read more about this and the original study click here.

This article is not meant to be used for medical purposes.  Consult with your doctor for medical guidance.