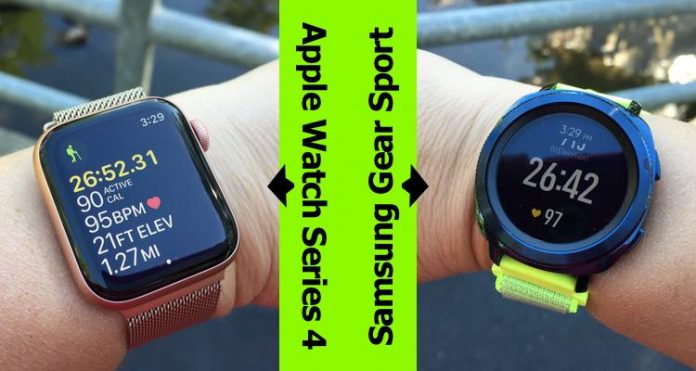 So I’ve had the Gear Sport for almost a year and it’s had a few firmware updates that seem to have really improved the built-in GPS. Early on, it didn’t seem to be as accurate but it’s been testing very well since this summer.

I just picked up the Apple Watch yesterday and I’m going to be testing against the Gear Sport, Garmin Fenix 5s, and Fitbit Versa.  I’ll also test it against a chest heart rate monitor and a handheld GPS device for the full review.

I’ve previously tested the Gear Sport ([amazon_textlink asin=’B075X35D8M’ text=’see price on Amazon’ template=’ProductLink’ store=’thejournier-20′ marketplace=’US’ link_id=’d2ca8ca9-bece-11e8-ba32-458585e83d63′]) against a handheld GPS device and it performed well.  The trail I took is also one that I’ve taken a number of times for different reviews so I’m very familiar with it.  I know what areas along the trail typically challenge GPS and common GPS behavior to expect.

The Apple Watch Series 4 and the Samsung Gear Sport both have built-GPS, although the Apple Watch has access to more satellite systems.

So, onto the results!

First off, the Apple Watch Series 4 is very fast to connect to GPS signal.  In the three tests I’ve done so far, the GPS connection is almost instant.  The Gear Sport takes a little longer to connect sometimes but it depends on the environment.

The walk/hike took about 35 minutes and in that time the Apple Watch 4 used 6% of its battery.  I should add that I received a phone call that I took through the Apple Watch during the hike and it didn’t seem to affect the tracking of the activity but it is probably reflected in the battery usage, so I’ll need to do more tests to see how much the GPS alone uses.

One way or the other, there wasn’t any significant battery drain going on during the GPS activity for either watch.

Below are the estimates for the hike from both watches.  The Gear Sport provides more data than the Apple Watch so I only compared data that both provide.

As you can see the data is very similar.  I was keeping an eye on the heart rate estimates on both watches throughout the walk and they were always either exactly the same or there was less than a 3 bpm difference.

The Apple Watch estimated my average heart rate at 95 bpm while the Gear Sport estimated it at 96 bpm.

The calorie difference is also small.  The Apple Watch gives estimates for both calories burned from just the activity reflected in the active calories and total calories which includes active calories plus the calories I would have been burned if I had just been laying in bed doing nothing- basically the amount of calories it takes to keep my body functioning (heart pumping, digestion, etc.) over the same amount of time as the activity

So there it is! Overall, both watches performed very well.  Those little glitches seen on the maps are typical for GPS and they usually don’t affect the distance estimate in any significant way, as long as you’re not seeing lots of glitches or lost signal.

I do wish both watches had breadcrumbing for hiking and that both showed more data during the activity on the watches.  Both are basic in the data they provide when hiking.

I’ll be pushing the heart rate sensor of the Apple Watch 4 more in a treadmill run but both watches did well with my heart rate throughout the 35-minute activity.

So, is there a clear winner here?  Not that I can see but I’ll also be taking both watches into more challenging environments and for longer hikes but I think it’s safe to say both are very good GPS watches with good heart rate sensors.