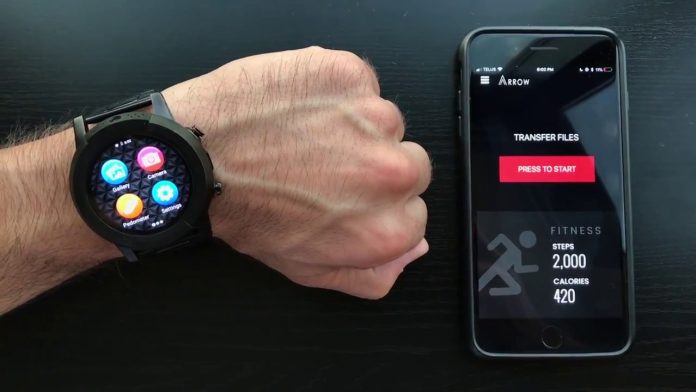 The Arrow Smartwatch, partially crowdfunded through Indiegogo is a watch we’ve been keeping our eye on over the past several months.  While, cameras on smartwatches aren’t particularly rare, most are low quality or a bit impractical because aiming the camera to capture the intended scene can be a bit of a challenge.

This is where Arrow steps in.  Instead of having a stationary camera, the lens rotates as the bezel is turned.  It can even be turned to take selfies and in HD video, with sound, of course.

A cool thing that the Arrow does is always orientate the screen upwards so the watch face won’t be sideways or upside down when the camera lens is oriented on either of those directions.  You can see this in the video below.  Kinda neat!

The watch has 8GB of storage for media files and through the mobile app photos and video can be transferred to a smartphone, either Android or iOS.

The watch also supports Wifi so transferring the files shouldn’t be too time consuming, assuming the connection is strong.  I wouldn’t want to try to transfer video over Bluetooth!

Music can also be stored on the watch and Bluetooth headphones or speakers can be paired for listening.

Beyond the camera features, the Arrow also supports notifications for text messages, social media, calendar reminders and more through a Bluetooth connection to a smartphone.  Weather is also supported.

Fitness can be tracked such as steps but there isn’t a heart rate sensor so fitness data will likely be limited.

The Arrow is a large watch with a case measuring 52 mm in diameter, so definitely not for a smaller wrist.  It’s also 17 mm thick and features a 26 mm strap so it’s a beast of a watch in size.

The screen is a 1.39″ OLED display and photos are captured at 5 megapixels while video is recorded at 1080P.

There’s no word on battery life that I’ve come across but we’ll keep you posted.

The Arrow is only rated IP65 for water resistance which is a low rating.  You wouldn’t want to get the watch wet.

Still, it is impressive that so much technology and capability is able to fit into a relatively small package.

We’ll be keeping our eye on the Arrow watch and see when it begins shipping.  It’s always a good idea to be leery of crowdfunded projects.  Sometimes they’re a risky investment and it’s been my experience that you can often receive the product sooner once it’s released commercially than as a backer.  That’s not always the case but I’ve seen that happen more than once.

This isn’t to imply that the same will be true of this watch but I just wanted to offer fair warning if you’re new to crowdfunding.