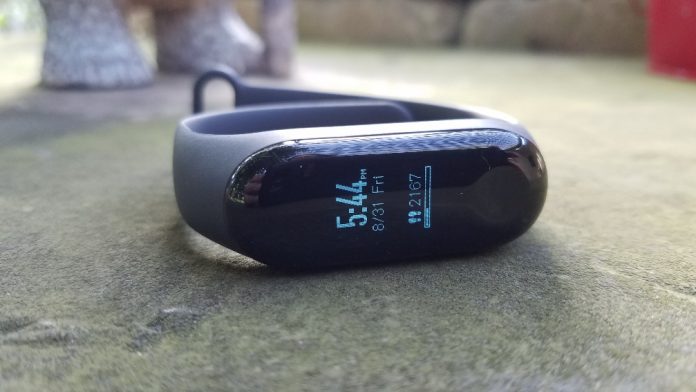 The Mi Band 3 from Xiaomi, a company well-known in the tech world for a variety of products from smartphones to laptops to smartwatches, is an affordable and reliable fitness tracker.  It is a much cheaper alternative to the more basic Fitbit models like the Fitbit Alta so it’s a good choice for those wanting to spend less but have a fitness tracker that is backed by a reputable company with a good track record.

The main features of the Mi Band 3 are:

The design of the Mi Band 3 is minimal and quite comfortable.  A short charging cable comes with the band and can be plugged into a USB port or charger.  The tracker itself pops out of the silicone band. 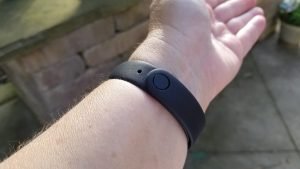 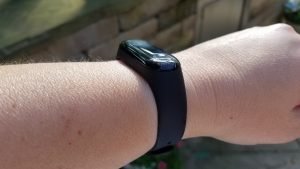 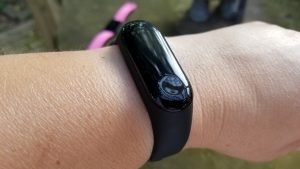 I think I would have preferred a charging clip because I always worry that removing the tracker from the band and replacing it again might risk damaging it but if you’re careful it shouldn’t be a problem.  And with a 20-day battery life you won’t have to charge it that often anyway.  I do wish the charging cable had been longer though.  It is quite short which isn’t a big deal when plugging into my computer but if I wanted to plug into a wall USB charging port, the cable is way too short to be practical.

Other than that it features an OLED screen which is easy to read indoors but difficult in bright sunlight.

The menus for the Mi Band 3 are simple to navigate by swiping up or down or from side to side, depending what items you want to select.  The instructions that come with the band are written well in English so you should be up-to-speed quickly.

NOTE:  At the time I’m writing this review, the Mi Band 3 is shipped supporting Chinese characters but updating the firmware will display English, if that is how your phone is set up.

The Mi Band 3 does three main things to monitor your health and activities and those are counting your steps, recording your heart rate, and monitoring your sleep.  It will also estimate the distance you have walked and calories burned from the number of steps you have taken.

It’s not a multi-sport watch in that you can have it record a specific sport activity like bicycling or running.  It’s mainly just for tracking your daily steps and heart rate which is fine if that’s all you’re looking for.

If you want a multi-sport fitness tracker that can record different activities in the same price range is the Mi Band 3, you might want to look at the Lintelek or Letscom which I’ve reviewed in the past.  If you’re willing to spend a little more and have built-in GPS and sport tracking I’d suggest the Amazfit Bip.

With all that said, the Mi Band 3 is for those just wanting to count their steps, monitor their heart rate, including estimating resting resting heart rate, and track their sleep.  If you don’t want more than than that then you don’t have to spend more money.

>>View the Mi Band 3 on Amazon

In my testing of the Mi Band 3, I’ve found it to be accurate for sleep tracking and estimating my resting heart rate.  I compared it against the Samsung Gear Sport and the numbers were very similar.

Below are stats from one night when I was sleeping:

As you can see the stats from the Mi Band 3 and Samsung Gear Sport are very similar.

The Mi Band 3 estimated my resting heart rate at 59 bpm (beats per minute) while the Gear Sport estimated 57.

Below are the estimates from the same night for hour long I had slept:

Again, the numbers are very close and I think fairly accurate.  There’s no way for me to know exactly when I fell asleep but I know when I woke up and I actually think the Mi Band 3 estimated when I woke up a little better than the Gear Sport.

Step tracking also tested well for me.  I did several 100-step tests and it tested well.  If it was off it was only off by 1 or 2 steps.

I haven’t had any issues with Bluetooth connectivity with the Mi Band 3.  It remains connects to my Samsung Galaxy S7 (yes I still have the S7!) and it reconnects when I come back in range.

Notifications come through reliably and it does show the entire text message instead of just a few words.  You may have to swipe the screen  but I do like that I can see more than just who texted me and that the notifications remain on the band until I erase them.

I also like that it shows the weather.  That’s a handy feature and it’s been accurate.  It gets the data through the Mi Fit app. 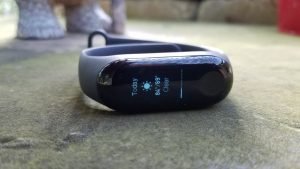 The Mi Fit app, which I also use for the Amazfit Bip, has always been reliable for me.  It’s fairly easy to navigate though I’d like to see a better interface in the future.

Through the app you can see your steps, heart rate, and sleep history and also set up what notifications you’d like to receive on the band and customize how often you’d like the heart rate sensor to measure your heart rate.  It can measured as often as once every minute which is what I have it set on.  I think this gives you the best picture of your heart.  The more frequent the readings the better for estimating resting heart rate.

The Mi Band 3 is a basic fitness tracker but one that is reliable and more accurate than most budget friendly fitness trackers out there.  Because it is coming from Xiaomi you should be able to expect continued support and firmware updates in the future which is important.

An advantage it has over some more popular or pricey fitness trackers with the same features is that it is waterproof for swimming.

I like that it doesn’t try to do more than it’s really capable of.  A lot of your cheaper fitness trackers will include blood pressure monitoring and blood oxygen measurements but most aren’t that accurate at either.  If you are looking for a watch that does a decent job at measuring blood pressure, I had good luck with the Tom Tony P3 ECG fitness tracker.

What the Mi Band 3 does it does well and for a very affordable price.  It’s also very comfortable to wear and the silicone band can be changed easily.  There’s a variety of colors available (on Amazon) from third-party sellers so you can swap out the band to match your outfit or mood.

Overall, I can certainly recommend the Mi Band 3 it if it offers the features that you’re looking for.

>>View the Mi Band 3 on Amazon