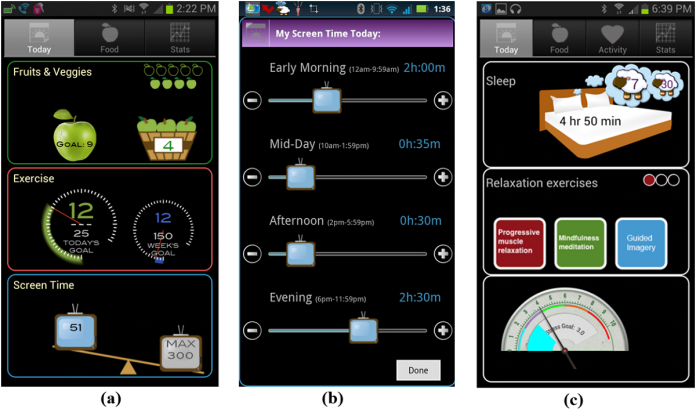 The numbers aren’t good for many Americans.  Less than 15% of us eat 5 or more servings of fruits and vegetables a day, 71% of Americans consume more saturated fat than what is recommended,  half of us don’t get the recommended daily minutes for moderate to vigorous physical activity, and more than half spend more than 2 hours a day watching TV.  Trying to change those behaviors isn’t so easy but a new study by Pellegrini et al, 2018 appearing in the Journal of Medical Internet Research, shows that a multi-component approach to tackling these unhealthy behaviors achieved some long-term success.

While there’s been multitudes of studies on changing health behaviors to reduce health risk, primarily cardiovascular and metabolic conditions, this one took a little different approach in that a variety of tools and methods were used to help people make better choices throughout the day.

Participants used a smartphone app that helped them log and view their daily behaviors such as how much time they spent watching TV, how many servings of fruits and vegetables they were eating, sleep quality, and their stress levels.  They were also given an accelerometer (fitness tracker of some sort) to keep track of physical activity and also received coaching by phone from trained professionals.  Participants also received a small reward, $5 for 12 weeks, for sticking to the plan.

By the end of the 9-month study 54.6% were still participating which is a much higher retention rate than just using a fitness tracker alone.  While this study didn’t discuss fitness trackers in detail, other studies have shown that people typically don’t stick with those 10,000 steps a day goals for more than a week or two.

I think what this study shows is that changing behaviors requires more than just one tool or focusing on just one behavioral change, such as eating more fruits and vegetables or being more physically active.  The mobile app and the accelerometer are important tools for people to keep track of their behaviors and physical activity but I think a key to greater success may be the coaching.  Incentives may also be very important but I’m not sure what a sustainable incentive could be outside of a study.

It’s not like Fitbit or Garmin is going to pay us $5 a week to get our steps in and make sure we eat our fruits and veggies.  Having a healthier body would be considered an incentive but it’s difficult to get people to change behaviors that improve their health until they start having health issues such as cardiovascular disease or diabetes.

Coaching is something that I think is very important in keeping people on track and in this study mobile coaching over the phone proved to be effective.  Coaching sessions don’t have to be in-person.  Whether such coaching can be done by AI (artificial intelligence) through mobile apps and/or fitness trackers as effectively as talking to an actual human being on the phone remains to be seen however.

Fitness trackers are getting more into AI and offering personalized coaching.  The Suunto 3 Fitness is one of the newest devices offering coaching for physical fitness.  I think we’ll be seeing much smarter and more personalized goal setting from our fitness trackers soon but it remains to be soon how effective such smart apps and gadgets will be in helping us live healthier lives.

We might have to include an old-fashioned technique, like talking to another human being, as scary and undesirable as that may be for some of us!