I enjoy reviewing budget friendly fitness trackers and recently came across the Z17 activity/fitness tracker and have been using it for the past couple weeks to get a good idea how well it works.

The Z17 (View on Amazon) is a basic activity tracker that tracks steps, heart rate, distance, calories burned for active minutes (when walking or running), and sleep.

The Z17 isn’t a multi-sport fitness tracker and instead is meant just for walking or running so if you’re looking for a basic activity tracker to track your steps on a daily basis and don’t need it to track other types of workouts, it’s a good option.

I’ve been impressed with the step tracking accuracy.  Many of the budget fitness trackers I’ve been reviewing lately are a bit stingy on steps.  Many have step tracking algorithms that don’t register your steps until they have detected that you’ve walked at least 20-40 steps (depending upon the tracker) and that can add up to a lot of lost steps if you take several short walks throughout your day.

Fitness trackers that do this do so to prevent counting random arm movements as steps but I haven’t noticed the Z17 overestimating my step count from arm movements.

The Z17 tries to track every step.  It doesn’t wait until you’ve walked a certain number of steps and then add them and I personally prefer it that way.

Also, some cheap (and not so cheap) trackers pick up bumps along the road while you’re riding in a car as steps but again I haven’t noticed the Z17 doing that either.

I performed several 100 count step tests in which I walked 100 steps and the Z17 either detected exactly 100 steps or was off by 1-2 steps, so it did a good job.

So, I would give the Z17 a high rating for step counting.

Another thing I’m very picky about when I review fitness trackers is the heart rate sensor.  This is a feature that I believe needs to be accurate for health reasons.

While no wrist-based heart rate sensor is 100% accurate and should never be used as a substitute to a medical device, they should give you a good picture of what your heart is doing while you’re resting and active, at least within a reasonable margin of error.

I don’t think there’s any general consensus for what a reasonable margin of error is for write heart rate sensors but for me I expect the resting heart rate to be within 1-2 bpm (beats per minute) accuracy.  Most trackers are good at measuring your resting heart rate, as the Z17 is.

During more active times, I consider a range of 3-5 bpm reasonable compared to a chest heart rate strap when I’m walking or running.

Wrist HR sensors generally do not perform that well for strength training or activities that involve flexing the wrist like pilates, weight lifting, or even Yoga, at least the workouts that put weight on your wrist.

For those types of workouts, you’ll need to invest in a chest heart rate strap to get the best accuracy.

So how did the Z17 do during more active times compared to a chest HR strap?

On the treadmill versus the Wahoo TICKR (Read Review) chest heart rate monitor paired with the Fenix 5s, the Z17 did so-so.  It was usually measuring my heart rate lower than the CHRM by about 5-15 bpm.  At times it was matching the CHRM but it was often consistently lower though it did a better job when I held my arm up to view the tracker.  It didn’t do so good when my arm was hanging at my side.

So, I’d give the HR sensor high marks for measuring my heart rate when I was at rest but much lower marks during physical activities.

Sleep tracking did okay, definitely not on par with Garmin or Fitbit but decent.  It did detect light and deep sleep and times that I was awake.  It didn’t detect that I was awake until I actually got out of bed.  More advanced sleep tracking can detect when you actually wake up within a few minutes but it did an okay job.

The mobile app used for the Z17 is H Band 2.0.  It’s used by a number of budget fitness trackers.  The layout of the app isn’t the most intuitive but most people should figure it out after going through the various screens and menus.

Heart rate is measured once every 30 minutes and you can view the records of that through the app.  Like I said before, the resting heart rate was very accurate but I would prefer to have a choice of how often my heart rate was measured, such as every 10, 20, 30 minutes.

The Z17 also supports female health tracking for menstrual cycles.  This may be useful for some women.  Messages pop up on the tracker once a day reminding women what day they are in during their period and also reminding them to change their sanitary pad.  That part I thought was a bit unnecessary.  I don’t think most women need to be reminded of that but it could be useful when keeping track of dates for family planning or if you’re having irregular periods.

Of course, back in my day, the wall calendar and a pen marking the first day of my period did a pretty good job too. Ha!

Through the app you can also use your phone’s GPS to track outdoor activities such as running or walking.

Bluetooth regularly became disconnected on my phone when it was out of range and didn’t automatically reconnect when I came back into range.  It always reconnected through the app when I did so manually and syncing data was never an issue but it should have reconnected automatically when the tracker was in range of my phone.

I don’t know if everyone will have this issue or it’s more specific to my phone. (Galaxy S7)

The Z17 is supposed to have automatic screen brightness and the ability to set the brightness level manually but this feature didn’t appear to work for me.  It was plenty bright to see indoors, really too bright at night when tossing and turning in bed before falling asleep, and like most trackers in this price range the screen was difficult to see outdoors.  It’s better than many I have tried and I was able to read the screen but just barely.  It’s not really geared as an outdoor watch. 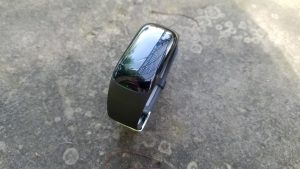 I do like the sleek look of the band.  The strap appears to be of good quality but it did bother my wrist a bit at times when I wore it.  It wasn’t terribly uncomfortable by any means but a softer strap would probably improve comfort.  Unfortunately, the strap isn’t replaceable. 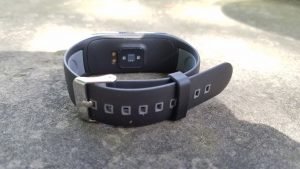 Also, there are no graphical marks on the screen indicating where to press the sensor to navigate through the menus.  It would probably become second nature in time to know where you need to touch but a mark indicating the right spot would help.

To charge the watch, there is a clip-on charger that holds securely in place.  The cable is short though, less than a foot.

Battery life seems to live up to what is advertised.  You’d probably easily get 5-7 days out of it between charging.

The Z17 is one of the most accurate step tracking devices I’ve used in quite a while, so if that is your primary concern then it may be a good option.  It also tracked my resting heart rate accurately but struggled during activities.  So keep that in mind depending upon your specific needs.

Other features I didn’t previously mention it having are a stopwatch and timer.  There are also three different watch faces you can choose from and you can test your heart rate at any time by navigating through the tracker’s menu and going to the heart rate screen.  Distance is determined by your steps and calories burned based upon your walking/running are displayed on the watch and appear to be fairly accurate.

Notifications are also supported on the watch, so you’ll see what number is calling, text messages and other notifications.

Through the app, you are also able to start and view running/walking activities on a map using connected GPS with your phone.  This will give a more accurate distance estimate but even the estimated distance not using GPS through the watch was very good compared to the Fenix 5s.

A watch very similar to the Z17 that I’ve previously reviewed is the WP112 (Read Review) and it tested out a bit better if you would like to compare the two.

If you’re wanting a multi-sport watch in the same price range as the Z17 you might want to check out the Lintelek (View on Amazon | Read Review) or the LETSCOM (View on Amazon) fitness trackers.