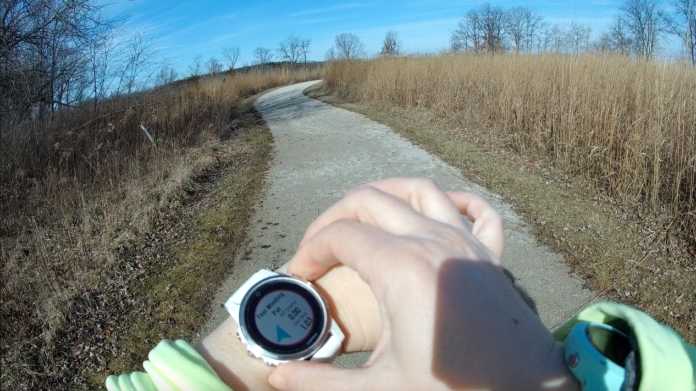 Many people are using fitness trackers and fitness apps to help them manage or lose weight but how do you know the calories burned estimate is accurate for your workouts?  Every fitness tracker I have used gives me a different estimate for the same workout.  Some results are downright outlandish as is the case with Google Fit.  It usually suggests I’ve burned a good 200 calories more than my Garmin Fenix 5s or Samsung Gear Sport.  Then there’s also a difference between the Fenix and the Gear Sport as well, with the Fenix estimating higher than the Gear Sport.  The Fitbit Blaze gives me a lower estimate than both.  So which one should I believe?

Stanford Medicine* studied the accuracy of seven different fitness trackers including the Apple Watch [View on Amazon], Fitbit Surge, Basic Peak, Microsoft Band, Mio Alpha 2, PulseOn, and the Samsung Gear S2.  While the study indicated that the trackers did a good job estimating heart rate especially during cycling with an average error of only 1.8% and less accurate for walking, with an average error of 5.5%. None was nearly as accurate estimating calorie burn as heart rate and some were way off.

The Fitbit Surge [View on Amazon] scored the best in the calorie burn, referred to as energy expenditure (EE) test.  Its estimated error for EE was 27.4%.  The PulseOn was off by 92.6% in the study.  Interestingly, the lowest relative error for all of the devices was for walking and running calories and worse for rest calories.  Also, the error rate for heart rate was higher for males than for females which can throw off energy expenditure estimates even more.

While the Stanford study doesn’t help me in regards to the trackers I have, it does point out the wide discrepancies between calorie estimates between fitness trackers.  While most do a good job with heart rate estimates, they still aren’t so great with calorie estimates.

How to Calculate Calorie Burn To Compare to Your Tracker

Well, to possibly help you determine how accurate your particular fitness tracker is you’ll need to do some math.  It’s important to understand what MET is.  It is basically defined as the ratio for calories burned per hour when you’re at work (walking, running, chopping wood, washing dishes, etc.) to your resting metabolic rate (when you’re sitting or sleeping).  Every activity has their own MET value and this is what is used in the calculation to determine how many calories you’re actually burning.  Fitness trackers likely use these in their algorithms to estimate energy expenditure (calorie burn) but also use other factors to greater or lesser degrees.

For example, sitting has a value of one MET, meaning that you burn 1 calorie per kilogram of weight per hour.  So if you weigh 145 pounds (about 66kg), you burn at rest 66 calories per hour.  Activities that you perform will obviously have a higher MET value than 1 because you’re expending more energy to perform the activity than when you’re just sitting still.

So if you know the MET value for whatever particular activity you’re doing then you can plug that into the following equation.  MET value*weight in kg = calories burned per hour.  Of course you’ll need to know the MET value for the activity and you can find that by visiting the Compendium of Physical Activities site.  If you hover over Activity Categories in the top menu a list of different activities appears.  For my estimate, I chose walking since I walked on the treadmill last night.  According the site the MET value for walking at an average pace of 3.5 mph is 4.3.  There’s several different METs for walking because not all walking is the same!

I walked for 40 minutes and the Garmin Fenix 5s [View on Amazon] I was wearing estimated my calorie burn at 241.  Now my math is going to be a little more difficult because the equation is for 60 minutes not 40, so I’ll have to divide the calculation by 1.5 since 60 minutes divided by 40 is 1.5.  If I had walked 30 minutes I would divide the result of the equation by 2.

So here we go for my calorie estimate!

So according to this estimate I burned 189.2 calories while the Fenix estimated I burned 241.  That’s a difference of about 23%.  I should note that I also ran for a few minutes during this workout and walked at a slightly higher speed during most of it.  I also walked for a slower pace for a few minutes when my son interrupted me to answer a question on his homework. There isn’t a MET value for this particular situation but I still think the one I selected is pretty close because my average speed was very near 3.5 mph. I would have to truly walk at 3.5 mph for the entire 40 minutes and then compare the results to be more fair.  See why estimating energy expenditure (calorie burn) is so difficult!

Tonight, I’ll try to walk at 3.5 mph for 40 minutes and see what the difference is.  Of course there is room for error in this method (how do I know I’m really walking exactly 3.5 mph if the treadmill or tracker isn’t 100% accurate in the speed estimate) but it should give me a good idea within a reasonable range of how accurate my tracker is for this particular activity and I’ll be back to update with the results.

UPDATE:  Okay, so I set the treadmill to 3.5 mph and walked for 40 minutes and this time the Fenix said I burned 230 calories but it also estimated my average speed at 3.2 mph and max speed at 4.3 mph.  So yeah, definitely not an exact science here but it looks like the Fenix was off by around 18% according to the MET estimate which isn’t bad considering the results from the study above.  Then again, it wasn’t a perfect test but it doesn’t look like the Fenix 5s is overestimating by a ridiculous amount.  That’s good to know!