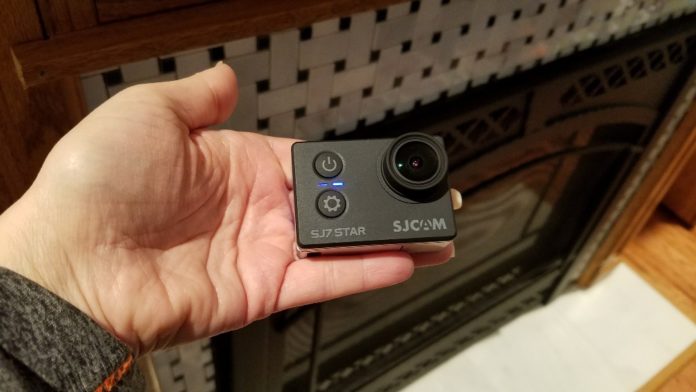 Well, it’s finally warm enough outside to get out and test the outdoor performance of the Matrix Powerwatch but it’s also raining buckets.  However, I did take advantage of a short window of dry air to test out the distance estimate of the Powerwatch against a GPS watch and the first test turned out very good.

Although the Powerwatch doesn’t have a built-in GPS or the ability to connect to your phone’s GPS, it does seem to able to estimate distance well by the number of steps taken, at least for me.  The Powerwatch estimated .31 miles while the Samsung Gear Sport using GPS estimated .32.  Yeah, it was short and quick walk because of the rain and I’ll be doing more tests but so far I’m impressed.

The Powerwatch also calculates calories differently than every other watch.  Because it uses body heat to recharge the battery, it also takes into consideration how much body heat you’re generating to estimate how many calories you’re burning.  The Gear Sport estimated that I burned 27 calories while the Powerwatch estimated 17… so quite a difference.  It’s yet to be determined which one is more accurate.

So far the Powerwatch has received two firmware updates since I received it but there’s still some features yet to be enabled such as automatic shutdown when the watch isn’t being worn after 45 minutes  and the ability to choose different watch faces.

That firmware update is supposed to be coming before April 2018 and that’s probably about the time the Powerwatch will be made available to retailers, although I don’t have any inside information to confirm that.  Right now it’s available on the Matrix website but I’d recommend waiting to purchase it until April or May of 2018 because that’s probably when it will be ready to be fully unleashed and plus there seems to be a production backlog at the moment by reading comments on the Indiegogo website.  The funding for the watch came in part from crowdfunding.

I also finally got to use the SJCAM SJ7 Star action camera (View on Amazon) while shooting segments of my upcoming review for the Powerwatch. It’s a very good GoPro alternative.  GoPro’s are great but pricey but luckily there’s some very capable competitors and the SJ7 Star is one of them.  I’ve had the camera for a few months but today was the first time I got to use it for a product review and so far I’m really impressed with the image quality.  The sound quality from the built-in mic is also good but for those windy days it’ll definitely need an external mic with a good wind filter. For clear close-up shots, I’ll still need to drag along my Nikon D5100 and I tripod but that’s okay.  It makes up for it in other ways.

I’ve been using my old Cannon Vixia HF R20 for a lot of the videos lately but it’s beginning to show its age and it doesn’t produce the best landscape quality shots.  In contrast, the SJ7 Star is great for outdoor scenes.  There’s several good reviews with sample videos on YouTube for the SJ7 Star and I’d recommend dong a search on YouTube for them.  I don’t think I’ll review the SJ7 myself since it’s been out for a while but I plan to do some how-to videos for it.  It does have a bit of a learning curve. I’m still learning, so you can learn along with me.

Well, that’s what’s going on.  I’m looking forward to creating more videos, and not just product reviews, because I plan to take you along on some mini adventures in Illinois’ wilderness.  Okay, we don’t have much wilderness but we can still have fun!