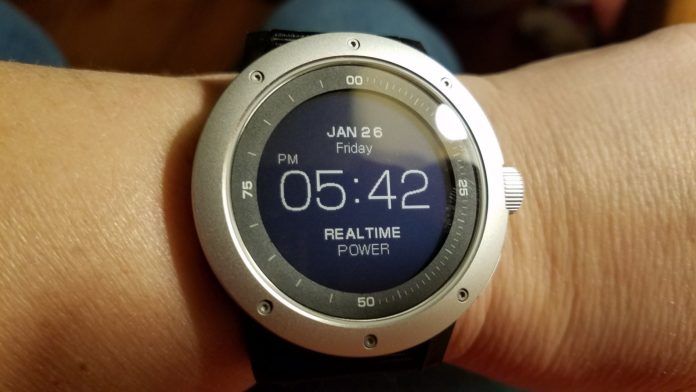 It’s here!  The watch I’ve written about for the past few months arrived yesterday.  The Matrix Powerwatch is a watch that uses body heat to recharge its battery.  It also uses body heat to calculate calorie burn which is supposed to be more accurate than a generic algorithm some other fitness trackers use.  Since I just received it yesterday this isn’t a review but rather a picture heavy look at the watch.

With that said, my initial thoughts on the Powerwatch are positive.  It needs some tweaking here and there but I’m not expecting perfection right out of the gate.  New firmware rolled out this week improved both of those.  It also increased the brightness of the backlight which backers on Indiegogo requested.  I think the display is easy enough to read though some have complained about it.  Maybe I’m just used to such displays on other watches but it doesn’t bother me.  One feature that hasn’t been enabled through the Android app yet (not sure about the iOS app) is the ability to select different watch faces.  I’m hoping that is rolled out soon.

So far I’m able to sync with the app reliably, the step count is a little generous and the distance estimate is okay but I’m still testing.  In my first couple workouts using the watch I’m discovering that I burn less calories, according to the Powerwatch, than my other watches indicate.  I expected that but I’ll get into those details much more later.  So without further adieu, here is the Matrix Powerwatch. Really nice presentation of the watch in the box. The strap that comes with the silver edition is canvas. It’s rather stiff and likes to collect lint but it does hold the watch in place well. I’ll probably be swapping it out for a soft silicone band in the future. It is a large watch. My wrist is about 6.5 inches so I don’t have a huge wrist and it looks large on me but I’m used to large watches.  The watch is 46mm in diameter and 12.5 mm in thickness.  It’s not a super heavy watch though and the build quality appears to be good. On the left side of the watch are two buttons and a rotating crown. I believe I took this picture before I updated to the 1.03 firmware but this shows the backlight. It was improved (made brighter) with the firmware upgrade. This is a lovely view of the watch on my nightstand. The inner circle on the back of the Powerwatch is made of aluminum and is surrounded by black plastic. This is necessary for proper energy conduction. In the photo below both my skin temp and the case temp were the same. Since they were the same at the time I took this picture, you’ll notice that the bars indicating the watch is charging are absent.  That’s because a temperature differential is needed to charge the watch.  i.e., Skin temperature needs to be higher than the temperature of the case for heat (energy) to pass through the watch. Below you can see that my skin temperature is now higher than the case temp. So now the watch is charging! I hope you enjoyed the pics and have a better idea of how the watch looks.  It’s available for order at www.powerwatch.com.  I’m assuming it will be coming to major retailers soon.  Check back because a full review is coming.