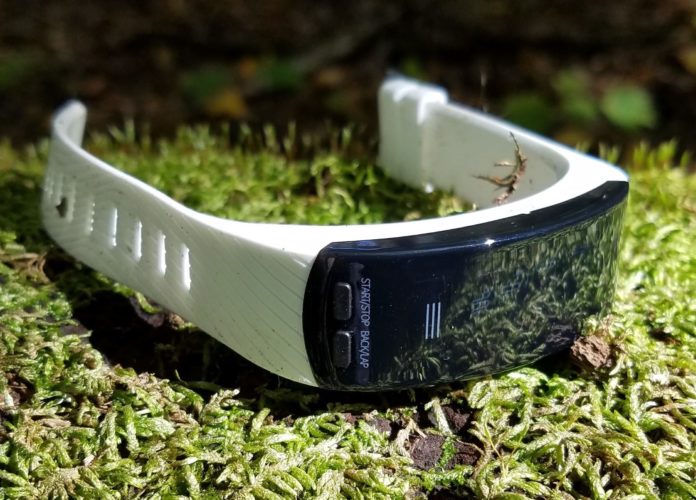 There are many cheap sports and fitness watches on Amazon and most of them are capable of basic fitness tracking such as counting steps and having a heart rate sensor.  Most range in price from about $20-$50 but none that I had seen before featured built-in GPS at a $50 price point.  It took Fitbit years to include built-in GPS in even some of their more pricey products, so I had to give the Tom Tony P5 GPS Fitness Band a try.  (See on Amazon) The watch looks similar in design to the Samsung Gear Fit or the Polar A370 Fitness Tracker.  It comes in four colors, has a silicone band that is comfortable and adjustable for nearly any size wrist.  It also features 24/7 heart rate monitoring and measures four different types of fitness activities including:  walking without GPS, walking/running with GPS, hiking with GPS, and bicycling with GPS.  It also as a thermometer, barometer, and the ability to measure altitude though I didn’t find any of those terribly accurate though.

What I was most interested in was the accuracy of the GPS, heart rate monitor, steps, and distance estimates. So, I tested it against the Samsung Gear Fit 2 (originally $170) since they are similar in design, though the Gear Fit 2 has more features of course.

My first test was on the treadmill and it didn’t do a bad job but I had a hard time getting the watch snug enough against my wrist.  On my left wrist the watch was either too loose or too tight because none of the holes on the band gave the right fit, so for future tests I wore it on my right wrist which I could get a better fit.  I discovered the band needs to be worn snug against the wrist for HR accuracy, at least during workouts.  I wouldn’t wear it so tight all day long.

Versus the Samsung Gear Fit 2 (Hiking) The second test was a 30-minute hike trying out the GPS for the first time and I didn’t know what to expect.  I have tested $200+ watches that have resulted in quirky GPS behavior at times but I was happy with the results from the inexpensive band.  I was surprised that the watch was able to detect my location within 30 seconds or less and it never seemed to lose connection, even though I walked into some dense woods and through a few valleys.

The Samsung Gear Fit 2 on the other hand lost GPS connection more than once and really, looking at the maps below of the hike, did a very lousy job in terms of tracking my true path, estimated distance, and calorie burn while the $50 Tom Tony was much more accurate.

Update: I also tested it against the Samsung Gear Sport and it out-performed the Gear Sport too in terms of GPS connectivity.

For some reason though, the Tom Tony vertically flipped my path in the app.  It did this with other tests too.  While it doesn’t affect the distance calculation, obviously I’d rather it display properly.  The map also doesn’t show any labels which I would prefer but the path itself indicated that the band didn’t lose GPS signal while all the straight lines on the Gear Fit 2 map show that the signal was lost quite often.

Versus the Gear Fit 2 (Bicycling)

The bicycling test was very promising for the Tom Tony while a total disaster for the Gear Fit 2 which I could never get to connect to GPS throughout the ride. The Tom Tony P5 connected in less than 10 seconds and never lost signal.  The bad thing about the Tom Tony is that the screen is very difficult to read in bright sunlight, in fact impossible when riding a bicycle.  It would have to be a very grey, overcast day to be able to read it.  So, if you want to see your progress as you ride, you’ll need a watch with a brighter screen.

In the GPS tests that I performed with the Tom Tony P5 GPS Fitness Band it did very well.  The app leaves a lot to be desired however.  I’m not sure if the flipping of the path is the band’s or the app’s fault.  Either way it needs to be fixed.  The heart rate sensor did a fair job.  I wasn’t wowed by its accuracy but I’ve experienced the same issues with much more expensive watches.  The battery life is solid.  Using GPS definitely drains the battery more quickly but it still out-performed the Gear Fit 2 in battery usage. The pedometer is a bit generous but the Gear Fit 2 has always been on the stingy side when calculating steps.

Overall, for $50 it’s a good GPS watch.  The GPS on it outperformed more expensive watches including the Gear Fit 2, Ticwatch 2, and Gear Sport.  So, if you’re looking for an affordable alternative to more expensive fitness trackers, you might want to give it a try.  I would rate it 3 out of 5 stars, taking off points for a an app that has few metrics to measure workouts, a difficult to see screen in sunlight, and not a super accurate heart rate sensor. The heart rate sensor is okay but not great.

I give it points for having quick connection to GPS (most of the time), ability to stay connected to GPS signals, and decent distance and calorie estimates.  Bluetooth connection and notifications also worked well.  It’s also very comfortable and lightweight. I forgot I had it on most of the time and that’s always a good thing.  It’s comfortable enough to wear while sleeping and it does have sleep tracking though with very little data provided in the app.  The battery life is also very good, without using GPS for lengthy periods it lasts several days between charging.