Within the last few weeks three similar fitness/smartwatches have hit the market or soon will.  They are the Samsung Gear Sport, the Fitbit Ionic, and Garmin’s Vivoactive 3.  All three offer very good fitness tracking from three of the best companies producing fitness trackers.  They’re priced similarly so a lot of people are wondering which one is the best option for their needs.  I’ve tried to break down the major differences between them to give you an idea of what features each excels at and what type of of user they’re aimed at.

The Samsung Gear Sport packs a lot of fitness tracking abilities but of the three also packs the most smartwatch features in that some of the more popular third-party fitness apps can be added to the watch as widgets.  The Fitbit Ionic is Fitbit’s first go at a smartwatch and so far the available apps in its store are limited but with the release of the brand new Fitbit Versa , another smartwatch from Fitbit, I think we’ll so more app development which may turn the Ionic into more of the smartwatch it wants to be.  The Garmin Vivoactive 3 provides the best fitness metrics of each discussed and is able to pair with external chest heart rate monitors.  Garmin is very good at providing useful workout information for the more serious athlete.

The Samsung Gear Sport is available for preorder as of October 13th at Best Buy and on Samsung’s website and will go on sale elsewhere at the end of October 2017.  It is similar to the Gear S3 but is more compact, has a little cheaper price tag, and can’t be used a stand-alone phone, although it does have a mic and a speaker for answering and making phone calls and responding to text messages.  It has the same rotating bezel as the Gear S3 and touchscreen as well.  Samsung Pay is on it, so if that is important to you, you got it with the Gear Sport.

The wrist band is 20 mm wide instead of 22 mm on the Gear S3 and I prefer the 20 mm width having used both.  There’s a variety of wrist band styles to choose from and there will be lots of less expensive third party wrist bands available as well.  For me, this is a big selling point, not just because I like to be able to change the look of my watch but in case the band breaks, it’s easily replaceable.  It also has support for Spotify which some may prefer.

It is water resistant to 50 meters and has a swimming app.  Although I don’t do a whole lot of swimming, I do prefer watches that are water resistant for peace of mind.  The build quality looks great.  The Gear S3 has very good reviews and unless Samsung really screwed up on the Gear Sport, I’m expecting the same quality.  From using other Samsung devices I’m familiar with their fitness apps and software stability and I’ve been impressed with both.

Notable Features  of the Gear Sport

The Fitbit Ionic is Fitbit’s first watch that they are marketing a “smart” watch.  They’re hoping that developers will provide lots of apps that users will be able to add in the future.  Right now, there’s not much available.  It also comes with the ability to make payments through Fitbit Pay.  It’s water resistant to 50 meters and also has a swim app like the Gear Sport and the Garmin Vivoactive 3.  Former and current Fitbit Blaze users will undoubtedly recognize the look of the Ionic.  It’s very similar but doesn’t have the awkward angles that always bothered me about the Blaze.  That look just never grew on me.

Where the Fitbit Ionic shines is in its heart rate sensor.  It’s supposed to be very good at determining your cardio fitness level and in the future it is supposed to have the ability to even detect sleep apnea. It features coaching for a few fitness activities and supports Pandora.  Like the other three watches in this review it has built-in GPS.

Notable Features of the Fitbit Ionic 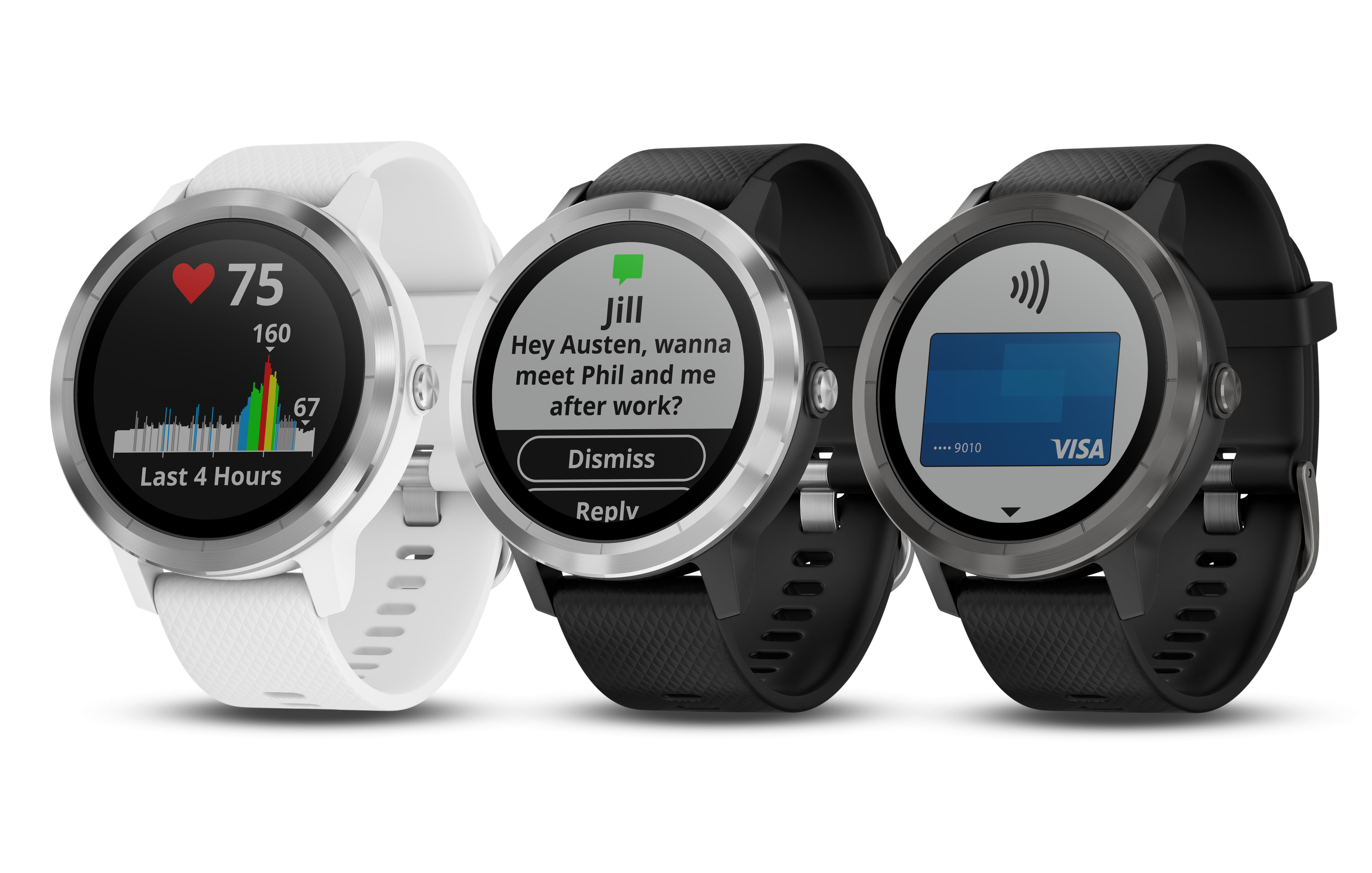 I’m still using my original Garmin Vivoactive because it has the ability to connect with ANT+ devices like chest heart rate monitors.  That’s a biggie for those who want or need more accurate heart rate monitoring when working out.  I use it to test against the accuracy of wrist-based heart rate sensors.  I also loved the battery life and that it is waterproof.  It’s great for using outdoors in bright sunlight.  However, I wasn’t too impressed with the second version of the Vivoactive.  Although it featured a built-in heart rate sensor, it looked too bulky for my taste.

When I saw the Vivoactive 3, I became interested again because, like the Gear Sport, it looks more like a traditional watch.  I don’t think  a watch has to have a round face to look good (I love the look of my square Pebble Time) but they do have a special appeal to many people.

Beyond the looks of the watch, Garmin is very good at fitness tracking and GPS. Like we’re seeing in the other watches at this price point, mobile payments are possible where supported.  Although this isn’t a big selling point for me, many people are desiring this feature.  Notifications have been improved on the watch.  While you still won’t be able to respond by voice to phone calls or texts, you can now at least send pre-defined messages (Android only according to the specs).

One thing that concerns me about Garmin is their app  Although my experience with the Vivoactive watch has been very good, their app just didn’t work right for me much of the time.  It has improved but without testing the Vivoactive 3 with the app I can’t say for certain things are better or the same but from what I have learned, a totally revamped app is one the way very soon.

Notable Features of the Vivoactive 3

New!  The Garmin Vivoactive 3 Music is now available and as its’ name suggests, it supports music storage.  It also has a new look but all the same features of the Vivoactive 3.

The Best at Fitness: All three of these watches are similarly priced and offer similar features.  From my experience having owned the Garmin Fenix 5s and the original Vivoactive, if you’re wanting a fitness watch that can also pair up to external chest heart rate sensors, cadence sensors, etc then the [easyazon_link identifier=”B074KBWL9J” locale=”US” tag=”thejournier-20″]Garmin Vivoactive 3[/easyazon_link] or [easyazon_link identifier=”B07DB3F6M2″ locale=”US” tag=”thejournier-20″]Vivoactive 3 Music[/easyazon_link] would be my suggestion.  Garmin’s mobile app also has tons of data to analyze for your workouts and does support third-party apps that can extend the functionality of the watch, such as hiking features, etc.  So, for the best fitness watch, I’d have to go with Garmin.

The Best at Being a Smartwatch: If you’re wanting a good fitness watch and support for some of the more popular third-party fitness apps (MapMyRun, Endomondo, MyFitnessPal, etc) and other popular mobile apps then the [easyazon_link identifier=”B075X35D8M” locale=”US” tag=”thejournier-20″]Gear Sport[/easyazon_link] would be the way to go right now.  Things that I really like about the Gear Sport is that it does have a mic which allows me to respond to text messages by voice.  I miss that feature when I’m wearing a watch that doesn’t have it.  Note that this feature only works with Android phones.

A Great Fitness Tracker with Potential to Be a Very Good Smartwatch:  I wouldn’t count out the [easyazon_link identifier=”B074VDF16R” locale=”US” tag=”thejournier-20″]Fitbit Ionic[/easyazon_link] either as a good smartwatch, especially now that the Fitbit Versa has been such a big hit.  The Versa uses the same operating system as the Ionic but doesn’t have built-in GPS (it uses connected GPS) but I’m expecting to see much more app development for Fitbit OS in the near future.