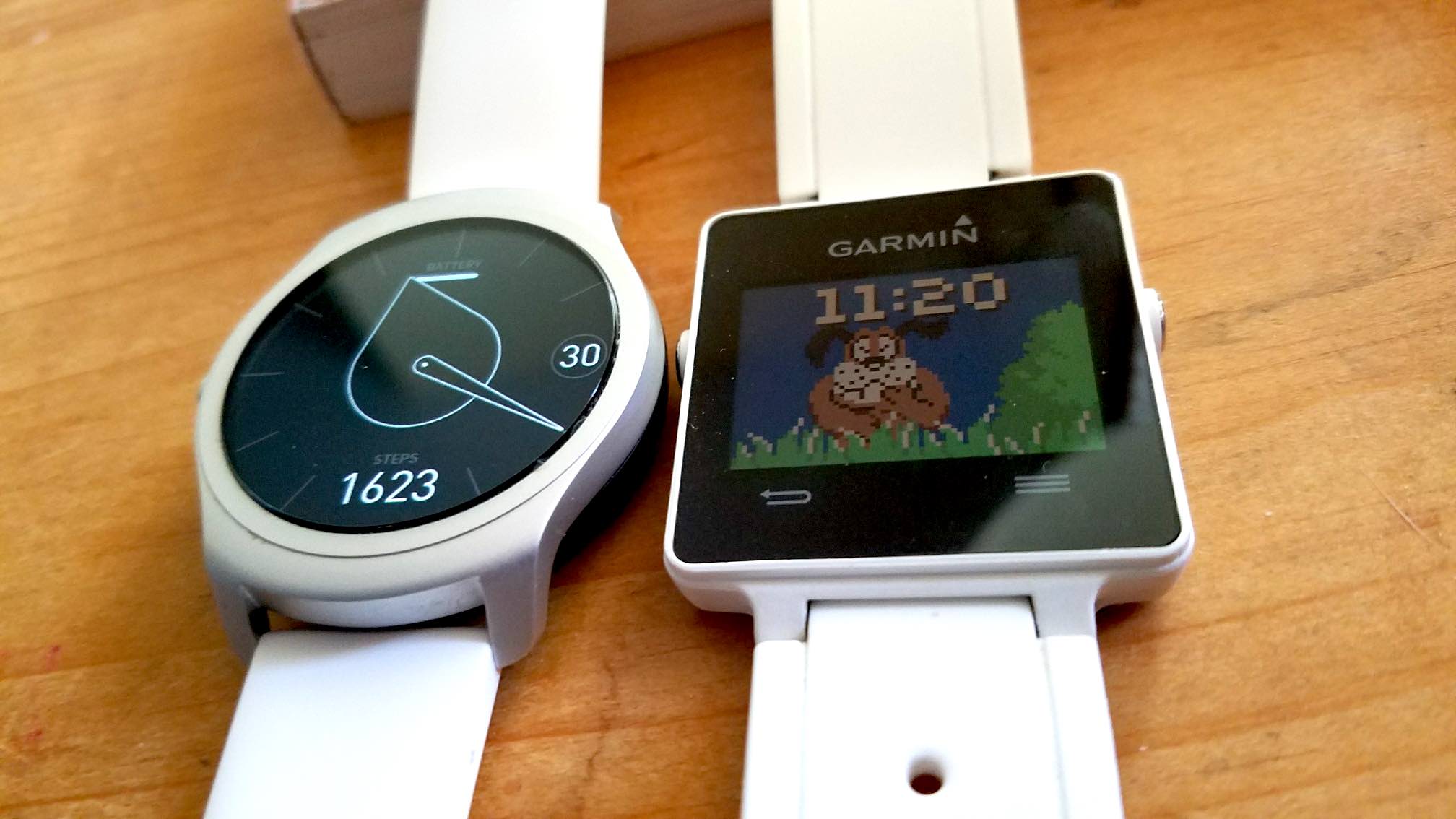 Just as I was getting ready to write up my experience with the Ticwatch 2’s fitness features, a new software upgrade arrived and I had to start all over again.  The issues that plagued the earlier software was a disappointing GPS accuracy and quirky heart rate data.  Sometimes the watch worked almost flawlessly during various workouts and other times it was a bit erratic.

So, when the update came I was eager to to see if the GPS/heart rate issues had been improved and the first couple tests were a total disaster.  I’m not sure why.  However, following tests since then have been much more promising.

In this review, I compared the data from the Ticwatch 2 against my first generation Garmin Vivoactive.  I chose the Vivoactive because of its ability to pair with a chest heart rate sensor.  Although, that plan backfired in the outdoor walking test, as you’ll soon discover, it allowed me to gauge the accuracy of the wrist-based heart rate sensor on the Ticwatch 2 during other workouts.

I performed five different workouts over two days and then compared the data.  The first test was on a treadmill and the data for both watches can be compared below.

The distance and average speed calculated by both watches were very similar and there wasn’t a huge difference in estimated calorie burn.  What I did notice is that my heart rate on the Ticwatch 2 as I was walked varied quite a bit. For example, it jumped from 105 bpm to 123 bpm from one second to the next when I hadn’t increased workout intensity.  But if you compare the trendlines below of the two watches, they are very similar though the Ticwatch consistently had my heart rate higher than the chest strap.  It certainly wasn’t terrible results but I would like to have seen less of a difference between the two.

During the next test I used a rowing machine.  This was right after I jumped off the treadmill.  The Ticwatch 2 did great against the chest HR sensor and I was not expecting such results.  The heart rate data was almost always exactly the same between the two at all times.

I also did a short 12-minute weight lifting/resistance training workout.  After the rowing results, I was optimistic that I might be pleasantly surprised again by the Ticwatch 2 but it suffered from the same issues that nearly every other wrist-based HR monitor does in regards to weight or resistance training.  It wasn’t exceptionally accurate.  Twisting my wrist around and putting weight on it showed the limits of a wrist HR monitor.  For such workouts, I would highly recommend using a chest strap if you’re really wanting to monitor your heart rate.

Actually, I would suggest investing in an ANT+ heart strap regardless.  It’s a great way to to test out whether the heart rate data you’re getting from whatever smartwatch or fitness tracker you own is reasonably accurate.  You can connect a chest heart rate monitor with an app on your phone like Strava while you’re working out and compare data. Ticwatch works with Strava as well, btw.

And just when I suggested that you get a chest strap, mine conked out on me while on an outdoor walk after I wrote up the above test results.  Luckily, I was mostly interested in the GPS comparison anyway but it sure would have been nice to have had the HR data from both.

One of the main complaints about the Ticwatch 2 has been the unpredictable nature of its built-in GPS.  I’ve tested it several times and on most occasions it has performed well but I have had a couple experiences in which it was very inaccurate for unknown reasons.  Sometimes it is slow to connect and other times it’s quick and I can never predict which behavior to expect.  I have been in an open prairie and not been able to pick up a signal yet I’ve been in thick woods with deep valleys and experienced strong, uninterrupted GPS signals.  With the latest update, my experience has been that its GPS has become more accurate.  Sometimes it’s still slow to connect however.  When it is terribly slow I just cancel the workout before I begin and try it again and it usually connects.

During this workout, I began the walk on neighborhood streets and then went into some dense woods.  The GPS on the Ticwatch 2 didn’t miss a beat.  It kept the signal the entire time and I’ve experienced this behavior other times on this trail.

A neat and useful feature of the Ticwatch 2 is that it shows your path as you’re walking, so as long as the GPS signal stays connected and is accurate it can lead you back to where you began.  I wouldn’t rely on it for serious treks but it’s a fun feature that might come in handy.  I just wish it could zoom in on the path more but it can at least lead you back in the right direction if you get turned around.

Again, the chest heart rate monitor I had paired with the chest strap’s batteries died on me during this test.  But I’ve walked this particular route several times with several different devices over the years and I know how my heart rate normally responds and the results I noticed on the Ticwatch 2 were within what I would expect.  It never lost track of my heart rate and I never got any off-the-wall readings.

Since my chest HR strap was down and out, for the bicycling test I compared the Ticwatch 2 against the Samsung Gear Fit 2.  The Gear Fit 2 is my go-to fitness watch because I’ve found it to be highly accurate for many different types of workouts.  I’ll be doing another review on it soon since some significant software upgrades have been released by Samsung after the release of the Gear Fit 2 Pro.

In this test I went on about a 2-mile bike ride, the first bike ride I’d been on in about four months.  Even though it was a fairly short bike ride I noticed that the results were almost exactly identical between the two.  The Ticwatch 2 kept right up with the Gear Fit 2.  It’s hard to say which one was most accurate but since I’ve compared the Gear Fit 2 against chest straps several times in the past, I know its heart rate sensor is usually within 3-4 beats or less.

I’ll be doing more bike rides and comparisons since one test isn’t really enough to say with any confidence that these results should be expected each time.  If I discover that there are problems later I will update this review but for now I am very impressed with the Ticwatch 2 for bicycling.  It did a great job.

I’ve already written about the Ticwatch 2’s smartwatch features before and I am impressed with them.  They have worked almost flawlessly for me.  I’m able to respond by voice to text messages.  The watch is equipped with a mic and speaker so I can answer and make phone calls as long as the watch is within bluetooth range of my phone.  Battery life has been good considering how much I use it throughout the day.  Even after using GPS in a workout, doing other types of workouts without the GPS, responding to notifications, answering phone calls, checking the weather, and keeping the screen turned on to ambient mode it gets me through the day easily with plenty of charge left by the evening.

I think a lot of people with fitness trackers are wanting the ability to respond to notifications and phone calls.  Yeah, it’s nice to get notifications but there comes a point when you want the ability to actually respond to a text message or answer a phone call, especially since those features are common on smartwatches.  That’s what drew me to the Ticwatch 2 in the first place because I already had a great fitness tracker in the Gear Fit 2 but I wanted the ability to interact more through the watch itself.

So Do I Recommend the Ticwatch 2 for Fitness?

If you’re serious about fitness and demand the most accurate results I can’t recommend to Ticwatch 2 but if you’re like me and you’re just trying to stay active and maintain a healthy weight, while keeping tabs on your heart rate then I would be comfortable in recommending it but only if you want the smartwatch features too because they will make up for its sometimes quirky fitness behaviors.  I have found it to be accurate on most occasions but there is room for improvement.

My strongest recommendation if you’re really interested in Ticwatch for fitness is to wait for the release of the Ticwatch S and Ticwatch E models coming out in November 2017.  They are supposed to be equipped with a better GPS and HR sensor and they’ll also ship with Android Wear 2.0 which may be of interest to you.  I will be doing a full review on the Ticwatch E when I get my hands on it.

Until then, I am happy with my Ticwatch 2 and I’m rooting for the company to keep making better products because I think it’s on to something very good.

Learn More or Purchase the Ticwatch 2 on Amazon: