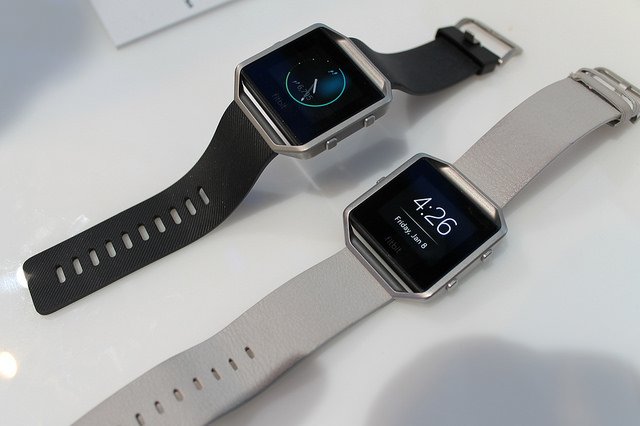 I know many people love their Fitbit activity trackers and I will be reviewing the Blaze soon.  It is the most popular brand for such devices but I tend to look for products outside of what is really popular, and instead focus on what is really good.  Not that Fitbit isn’t good but other products wowed me more when I was looking for my first, second, and third trackers.  Yeah, I’m kind of intrigued by these things.

However, the Fitbit Blaze and Alta have their appeal.  The Blaze is a rather unique looking fitness tracker/smartwatch.  When I first saw it, I have to admit I wasn’t overly impressed.    The gaps between the actual square device, which pops out for charging, and the hexagonal housing looks a little odd to me but I can get over that if the product knocks my socks off in other ways.

I am impressed with some of the features on the Blaze.  To me, one of the most important things about choosing a fitness tracker is to choose one that is going to motivate the wearer to be more active.  After all, that’s the point of wearing them!

I think the Blaze excels in this area with guided workouts and a visually appealing screen that displays data that is both useful and motivating.  And of course a fitness tracker should be fairly accurate and so far all the reviews I’ve read are positive regarding the built-in HR monitor and other features.  Fitbit has received a lot of criticism about inaccurate heart rate estimates from many of their other devices.

The smartwatch capabilities are important too.  I didn’t realize how convenient it is to have notifications sent to my band until I experienced it.  It is very handy and the Blaze looks to handle notifications in much the same way that the Apple Watch does and many other fitness trackers.

I am disappointed that the Blaze doesn’t have a built-in GPS.  I do many outdoor workouts and activities that I like to track with GPS because I find it more motivating to walk or bike a little bit further to see my tracks later when I get home.  The Blaze uses GPS from your smartphone instead, and even though I always have my phone with me, I don’t want to drain its battery when I’m out hiking.  I’d rather save the battery in case I need the phone for more important purposes, like taking selfies with squirrels.

It may not be a big issue to you if most of your workouts are done in a gym but if you’re the outdoorsy type or a more avid athlete, the Garmin Vivoactive, and soon to be released Garmin Vivoactive HR, are better choices in my opinion.  Both feature built-in GPS, are waterproof for rain and swimming, and compatible with ANT+ devices.  This enables them to pair with chest HR monitors, which are more accurate.  The Blaze strikes out on all of these features, which is disappointing.

Still, I think the Blaze will have a fan base and I look forward to giving it a thorough review.

Fitbit is also releasing the Alta in March of 2016, and I get the feeling that its target audience is soccer moms, if that term is till used today.  It does seem to be geared more toward women because of its smaller size and looks.  It’s $75 cheaper than the Blaze’s $200 price tag too, which can be a big plus, as long as the trade-off on features isn’t too significant.

Like the Blaze, the Fitbit Alta will be able to automatically detect your fitness activities.  Notifications are sent to the device from your phone.  However, it doesn’t have an optical heart rate monitor, which to me is something all fitness trackers should have, even if they aren’t 100% accurate.  As long they’re 95% accurate, I can live with them.  There are several other devices at the same price point that do offer a HR monitors, so not having it may not have been such a wise decision by Fitbit.

I do love the small size of the device, however.  One thing that bothers me about most fitness trackers is that they aren’t exactly the most stylish things, especially on a woman’s wrist.  I’m certainly not a trendy fashionista but I don’t like feeling like I’m wearing a band obviously proportioned for a man’s wrist.  Men can certainly wear the Fitbit Alta.  I’m not implying that it’s just for women but rather that it does seem to have taken women’s proportions and preferences into consideration more.  That’s refreshing.  It can even be jazzed up with more stylish bands, though they are more expensive than I think they should be.  However, they just don’t have enough features for a fitness/tech geek like me.  I’m a woman but that doesn’t mean I don’t like high tech!