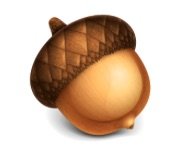 In a past life, before I became a conservation nut, I was a web and graphic designer.  In fact, I was an adviser for one of Adobe’s software products for three years.  I spent years mastering my skills working with Photoshop and Illustrator and created hundreds of online tutorials but as my career path changed I found myself using Adobe much, much less.  However, once in a while I still need the use of a graphics program but not so much that I’m willing to shell out a monthly fee to rent Adobe’s expensive suite of products.  One, I can’t afford to as a full-time college student and two, I completely resent having to pay monthly fees for software I was once able to purchase outright.  Microsoft has done the same thing with Office.  I’m tired of monthly bills.

Luckily, there are some great alternatives to Photoshop and two of the best for Apple is Pixelmator and Acorn.  This review will be focusing on Acorn.

Below:  After using the Instant Alpha Tool on a photograph of my son. For less than just one month’s rent of Adobe’s software, I purchased Acorn, created by Flying Meat Inc.  I’m not sure where the company name came from and I’m not sure I want to know but they’ve sure put together a good alternative to Photoshop.

Below:  Playing around with some text effects after following this tutorial and tweaking it a bit.

Is it as feature packed as Photoshop?  No, but I wouldn’t expect it to be. Still it does what I need it to do and the learning curve isn’t steep and neither is the price, which makes up for anything it may be lacking.

So far it’s been reliable and fast.  I haven’t discovered any bugs and it’s never produced that spinning beach ball of death all Apple users dread more than the plague.  Updates seem to be frequent as new features are added and I’m looking forward to future releases, without having to pay a monthly fee.  I’ll be sharing tutorials as I work more with the software.

So, if you’re looking for an affordable alternative to Photoshop and you’re a Mac user, take a look at Acorn.